A young Batwa boy has been killed in a national park while trying to access traditional medicine.

A young Batwa boy has been shot dead after being found in a national park in the Democratic Republic of Congo with his father.

They were collecting medicinal plants to treat an illness, carrying nothing but machetes as they sought to find the necessary herbs in the forest, their ancestral lands.

“On the morning of Saturday, 26 August, Munganga Nakulire, accompanied by his child Christian Mbone Nakulire, decided to go to the Kahuzi Bièga National Park to take care of his child, who suffers from diarrhoea.

“They arrived on the Bahaya Hill in the middle of the Kahuzi Bièga National Park, where they came across four eco-guard trackers. Suddenly one of them opened fire and shot at Munganga Nakulire, who was seriously injured in his right arm. He managed to escape despite his injury, leaving behind his child who was shot in cold blood while trying to hide.”

The father was very lucky to escape despite being shot in the arm. He was able to raise the alarm with the Batwa community, who sent a search party into the forest to look for Christian.

Pacifique Mukumbwa added: “At around 2 pm, Munganga Nakulire miraculously arrived at Buyungule, and told of the terrible events that had just happened. Very quickly, given his state of health, he was taken to the General Reference Hospital in Bukavu for appropriate care. Meanwhile, a delegation of pygmies went to the park to search for Christian Mbone. This delegation arrived at about 6pm at the scene of the crime and discovered the lifeless body of Christian Mbone abandoned in the forest. The remains will be returned the next day by this group of indigenous pygmies.”

“My father never touched a weapon, he went with my little brother to the park to look for the medicine, he only had his machete,” said Christian Mbone’s elder brother.

The following day, on Sunday, August 27, when the boy’s body arrived at Buyungule, the villager decided to take it to the HQ of PNKB [Kahuzi Bièga National Park] in Civanga. They were joined by others from neighbouring villages, and stood together to demand that they be restored to their rights.

Pacifique Mukumbwa added: “In their demands, the Pygmy indigenous peoples asked PNKB to compensate the family of the victim, and to fulfil their commitments contained in the roadmap adopted during the [Whakatane] dialogue between Pygmies and PNKB in 2014.”

“As the hours passed, the tension increased. Some young pgymies in the crowds, waving sticks and machetes to clear a place on land to build their houses, cried ‘We are going to stay here and this evening we are going to build our houses in our forest (in PKNB) if you do not give us another place where we are going to live.’

“On Monday 28 August, there were several hours of discussions between indigenous Pygmies (accompanied by the CAMV) and the Director of PNKB, Mr. Lucien Gédéon Lokumu. Both parties agreed that the costs of the victim's funeral would be fully covered by PNKB, and the terms of compensation for the family of the deceased would be discussed between the family and PNKB after the mourning.

“Meanwhile, pygmy indigenous peoples living in the high-altitude region of PNKB will meet with park authorities on 1 September to discuss the severe problem of lack of land that they are confronted with since their expulsion from PNKB in the 1970s. They will remind PNKB of the commitments it had made at the end of the 2014 [Whakatane] dialogue between the two parties. These pygmy indigenous peoples demand that part of the park be ceded to them by the Congolese government and, if not, that the government is looking for another place where they will live.”

The 2014 Whakatane draft roadmap had two key aspects: (1) ensuring the Provincial and Park Authorities meet the immediate livelihood needs of the Batwa, and (2) ensuring that the Batwa have pilot areas of PNKB returned to them where they can live and demonstrate that they can sustainably use and protect their forests. If successful, then this Batwa community tenure-based conservation, with support from PNKB and ICCN, would be rolled out across PNKB.[1]

During the initial Whakatane meetings that the Batwa held with the Park and Provincial Authorities in 2014, then again in 2016 and 2017, the Batwa have been clear that there is not another place for them to live that does not already belong to someone else. They are clear that there is no solution that does not involve recognising their rights to their lands at Kahuzi Biega.

It is clear there is no real prospect of a resolution to this situation until the Batwa customary tenure rights to their ancestral lands at Kahuzi Biega are recognised. The Batwa have proposed that this should begin with their having three pilot areas returned to them.

This is why the Batwa community at Kahuzi Biega embarked on the process of writing down their sustainability bylaws, developing their governance structures, and this is why they visited the Ogiek at Mt Elgon in June 2017 to see just how effectively such a community can conserve its lands and take care of its people, if it is able to live on (and control what happens on) its territory.

This is also why CAMV, FPP and FIPN have supported the Batwa to embark on a series of meetings with the Provincial and Park authorities to try and persuade the Authorities to recognise Batwa rights to their ancestral lands at PNKB, at first through returning pilot areas where the Batwa can sustain themselves and show that they can sustain the forest. It is clear that there is no real prospect of a resolution until the Batwa are recognised as having the right to live on their lands, and being able to conserve their lands with support from ICCN and from PNKB.

However, the terrible incident this week shows yet again that there appears to be no willingness from the park authorities to recognise such pilot areas. Quite the opposite, we now learn that a young Batwa, while searching for medicinal plants on ancestral lands, has been killed while trying to hide from the eco-guards after they shot his father. 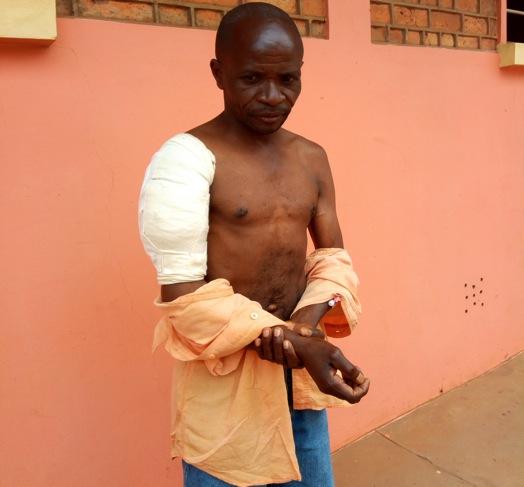 The Batwa are holding a meeting with the Park Authorities tomorrow, 1st September. Alongside all the pressing questions that will be asked in relation to the killing itself, there is perhaps an additional questions the Batwa are likely to ask:

If the authorities had listened and entered into dialogue in good faith, they would have heard the very clear proposals made by the Batwa, would have accepted the resolutions in the Whakatane pathway, and this killing would have been avoided.

It is very hard to see how the Whakatane Dialogue can proceed unless there is a real movement from the authorities to enable pilot areas where the Batwa can live and sustain themselves and their lands.

If there is no movement in the 1 September meeting, then how can the Batwa end the violations against them?

Forest Peoples Programme fully supports the community in their struggle against an unjust situation where they are excluded from their own lands, and left destitute at its edges: at the mercy of illness, poverty and maltreatment.

This is a situation that is of no benefit to the conservation of the forest or to the well being of the community. Batwa commitment to, and deep knowledge of, their lands, can help secure the forests in a way that secures community well being. As things stand such knowledge and care is being destroyed alongside the terrible destruction of such a young life.

Summary of Draft 2014 Whakatane Roadmap agreed between Provincial and Park Authorities and the Batwa:

(i) Support Batwa to develop bylaws and organisation so they are able to collectively own and manage their forests sustainably (CAMV, FPP & Kenyan IPOs, and proposed exchange visit to Kenya)

(ii) Forest land on the edge of PNKB be identified for pilot areas where Batwa communities can collectively own and manage their lands, in a supported and monitored way. The pilots then rolled out across all Kahuzi-Biega with all Batwa communities who want and are able to. This strengthens the ability of PNKB to protect the forests. (Ministries, IUCN, ICCN, FPP)