Some indigenous communities in South America have been working on a way to participate in REDD+ (Reducing emissions from deforestation and forest degradation) on their own terms. In 2009, Colombia began to create the National Strategy for Reducing Emissions from Deforestation and Forest Degradation (ENREDD+), an offshoot of REDD+. Currently 64 countries use REDD+  as a national strategy for climate change mitigation. It aims to reduce greenhouse gas emissions caused by deforestation in developing countries by offering financial incentives in exchange for the protection of forest resources and their sustainable use.

Some communities in Colombia didn’t agree to participate in the REDD+ process over fears of losing territorial sovereignty. Thus, the coordinator of the Indigenous Organizations of the Amazon River Basin (COICA) joined the ENREDD+ strategy and adapted it based on their ancestral knowledge. COICA opted to “adjust this initiative to our life without losing autonomy,” according to Mateo Estrada Córdoba, the Territory and Environment Coordinator of the Organization of Indigenous Peoples of the Colombian Amazon (OPIAC), and a member of the Siriano del Vaupés village. 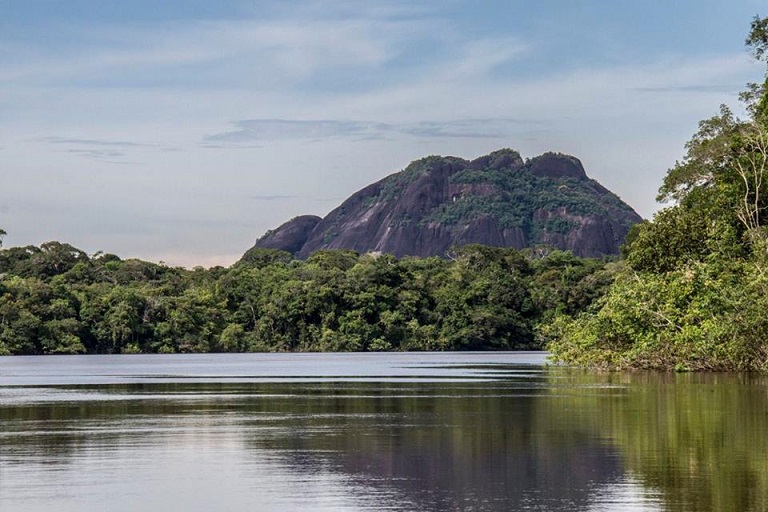 For the indigenous communities of the Amazon, it is important that ancestral traditions are recognized as the basis for the implementation of the RIA. Photo by Rodrigo Durán Bahamón

From there, the Amazon Indigenous REDD+ (RIA in Spanish) was born, which operates in Peru, Colombia, Brazil and Ecuador.

“[It is] a model that seeks to incorporate, in an equitable and culturally appropriate way, indigenous territories, Amazonian peoples and organizations to the national REDD+ initiatives,” Pía Escobar, government and social development officer of World Wildlife Fund (WWF) Colombia, said in an interview with Mongabay. WWF provides technical support to this process in Ecuador, Peru and Colombia.

“RIA has to do with broader ecosystem development. The integral part of indigenous peoples, the way of life that goes in harmony with natural resources and the environment […] this is a proposal according to indigenous life plans. We manage governance, the empowerment of the territory and the adaptation of public policies to our context,” Córdoba said.

The initiative led in Colombia by the indigenous organization OPIAC was launched in a region that has “169 indigenous reservations of 56 different villages and 52 languages, not counting the populations that are in voluntary isolation,” according to Córdoba. It seeks to be a model of conservation that can be replicated, not only in other ancestral territories but all national forests.

Pilot plan: reservation of the basin of the Inírida River

In the department of Guainía, inside the Puinawai Natural Reserve, is the reservation of the Upper Basin of the Inírida River (CMARI). It’s inhabited by 17 indigenous communities of the Puinave and Curripaco peoples. It contains 2,762,000 hectares of a variety of ecosystems, and provides habitat for many species of fauna and flora.

In 2012, the CMARI area was chosen as the location of the first pilot implementation project of the Amazon Indigenous REDD+ (RIA) in Colombia, which had its official presentation at COP18, the 18th meeting of the UN Climate Change Conference. 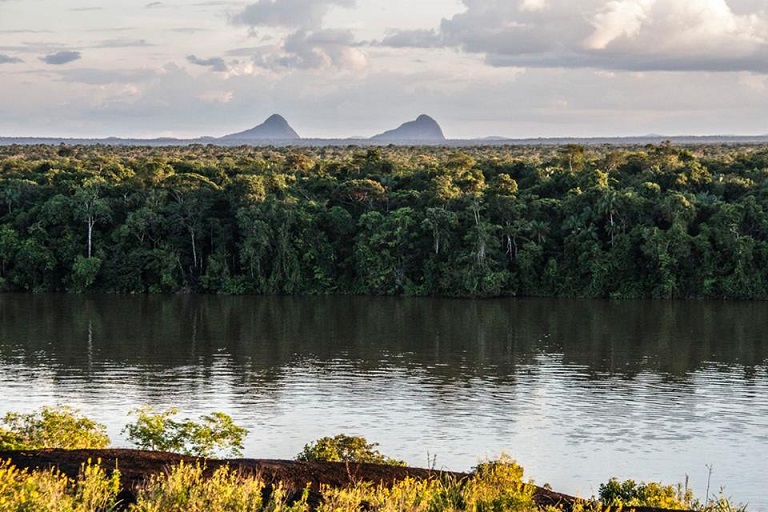 For Arcángel Agapito Luzardo, a member of the Puinave people and leader of the RIA initiative at CMARI, “this pilot carries the indigenous vision. It is a proposal that is born from the communities and has as its baseline the governance of the reservation, the social structure and the context of the territory.” Luzardo added that the area’s deforestation is connected, “to the fact that the governance and conservation traditions have been followed in order to avoid displacement and strengthen education, health, communications, housing, infrastructure, public services, means of transportation.” He says that the result has been an improvement in the livelihoods of indigenous communities.

Luzardo said shifting cultivation is part of the indigenous peoples’ ancestral knowledge, and should be valued. 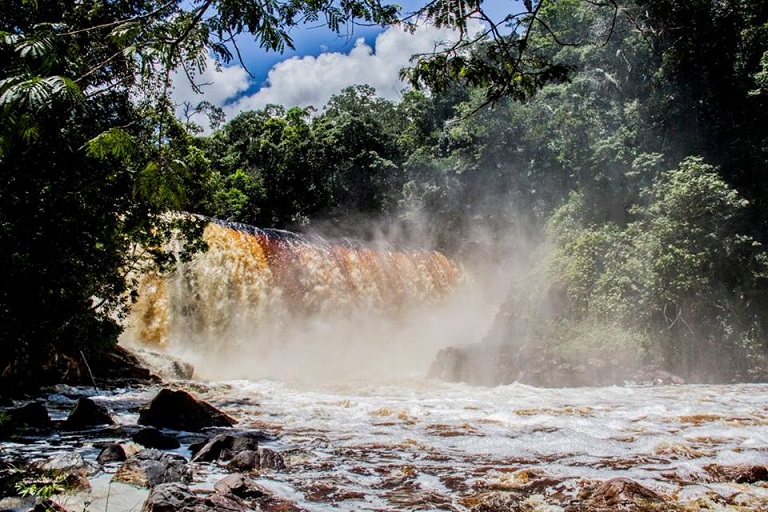 In 2012, the CMARI area was chosen as the location of the first pilot implementation project of the Amazon Indigenous REDD+ (RIA) in Colombia. Photo by Rodrigo Durán Bahamón

“We call our crops conucos,” he said. “We use [the land] for three years and then we abandon the land so it can naturally recover. During that period the last uses of the products are made. After the end of this period, following traditional knowledge another area is sought, where the land is fertile and productive for the family. If they do not make a strategic selection, their food security could be in danger.”

Luzado adds that the scale of use is also small.

“These products are used for family consumption, in the case of wood it is only used to build houses, it is not commercialized,” Luzardo said.

OPIAC’s Córdoba says the approach puts an emphasis on balance. To preserve the environment, indigenous people use resources without the purpose of making a profit; “we do not accumulate resources or have greed,” he said.

Luzardo hopes that the RIA will help future generations to “know their territory, appreciate it and take care of it.”  It is also about balance for him. 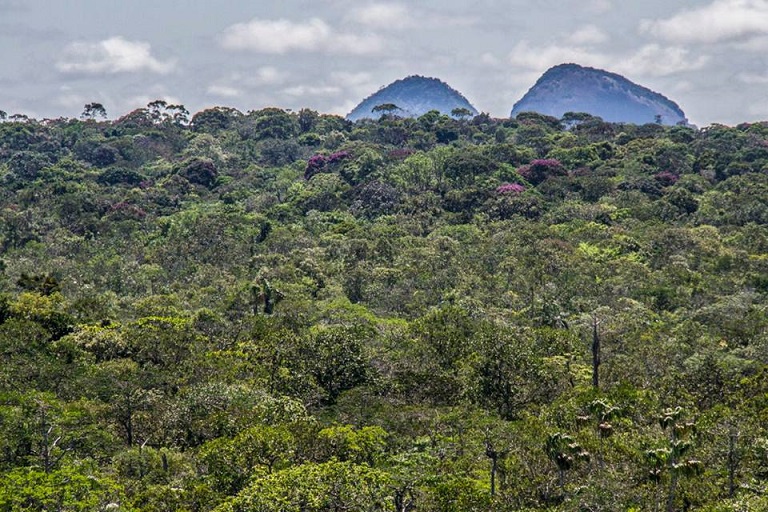 The reservation of the Upper Basin of the Inírida River (CMARI) is inhabited by 17 indigenous communities of the Puinave and Currutaco villages. Photo by Rodrigo Durán Bahamón

“Let them develop in harmony with the planet and thus improve the communities’ livelihoods so that they do not have to migrate from the place they live today,” he said.

La Chorrera is an administrative district located in the department of Amazonas, part of the Predio Putumayo reservation, an area of 5,869,447 hectares. Indigenous people of the communities of Witoto, Mirañas, Boras, Andoques, Ocainas, Muinanes, Nonuyas, and others live in the territory.

In this reservation, the Zonal Association of Traditional Authorities of the Chorrera (Azicatch) is developing the second RIA process.

“It is a pilot that is producing technical inputs, community monitoring, safeguards and ecosystem services studies. Information that we could replicate in other territories and serve for decision making,” Córdoba said.

He added that it is important for these communities to “recognize traditional authorities for the construction and implementation of the RIA as a mechanism to safeguard Amazon biodiversity.” It is also necessary to highlight governance and the strengthening of technical capacities, according to the presentation document of the RIA mechanism in Azicatch. 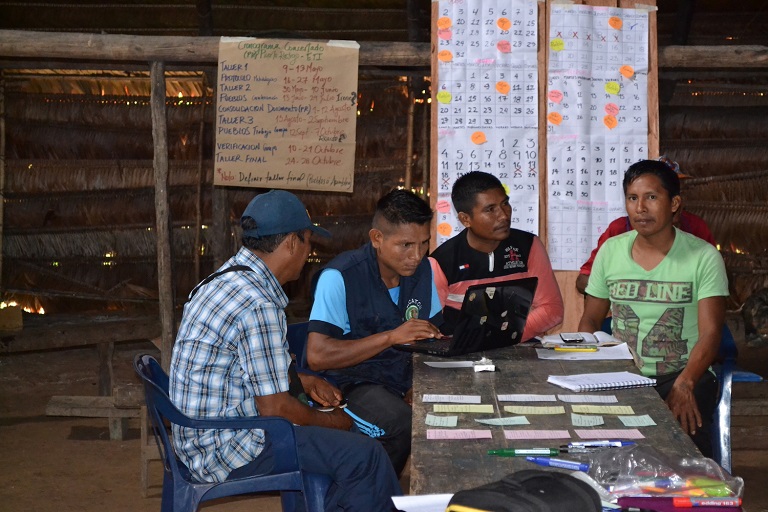 The second RIA process led by the Zonal Association of Traditional Authorities of the Chorrera (Azicatch) is being developed in La Chorrera. Photo courtesy of WWF Colombia

That is why WWF Colombia has been lending technical help. As Pía Escobar points out, “indigenous organizations are very strong in their political advocacy capacity, but sometimes they need additional support in the technical components.”

That technical support includes cartographic and carbon content information, ecosystem services, threats to the territory and other issues essential for demonstrating the value that indigenous territories have in mitigating climate change and complementing policy proposals.

The future of the RIA in Colombia

OPIAC’s Córdoba continues to look to the future in hopes of future success.

“Our knowledge must be applied,” he said. “We expect the RIA to be included in the national REDD strategy as a special chapter. This is being done by the Indigenous Amazonian Environmental and Climate Change Bureau and the Amazon Regional Bureau, a space for legitimate dialogue that we have with the Colombian state.”

For indigenous communities and organizations, RIA is an important step towards the conservation of their territories, but above all, of their ancestral knowledge. 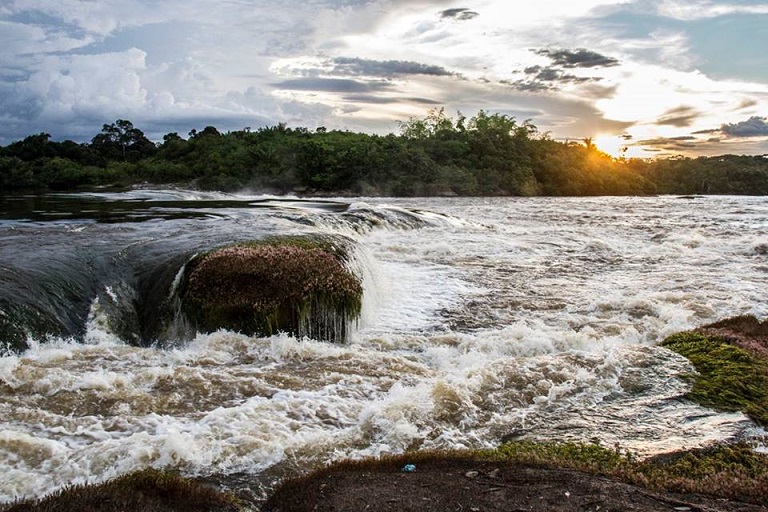 “We dream that the territories can be preserved as they are, with the abundance that exists, because the quality of life of the indigenous people is not measured in how much I have, but if hunting, fishing and medicinal plants are nearby or not,” Córdoba said. “We dream that schools have a curriculum where the center of education is the culture and the environment, [and] that communities have sustainable public services and that municipalities are green. What we can leave as teaching is a harmony between man and nature and between both: spirit; in addition to integrity among peoples. We have conflicts, but we do not live in war.”

Banner image: La Chorrera is an administrative district located in the department of the Amazon, part of the Predio Putumayo reservation. Photo courtesy of WWF Colombia

Eliana Garzón is a freelance journalist based in Colombia.

This story was reported by Mongabay’s Latin America (Latam) team and was first published in Spanish on our Latam site on October 25, 2016.