Bedouin community fear Galilee conservation plan is part of a bid to ‘uproot’ them.

Nature and Parks Authority faces opposition to planned wildlife corridor near Haifa, which environmentalists say is an important part of efforts to protect endangered animals 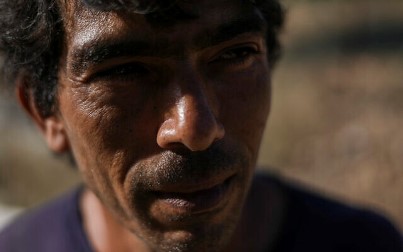 AP — Ayoub Rumeihat opened his palms to the sky in prayer as he stood among tombstones for Bedouins killed in action while serving the State of Israel.

Finishing the holy words, he gazed at the distant Mediterranean Sea across a valley full of olive and oak trees where his community has grazed goats for generations.

Rumeihat says the Bedouins, celebrated by the Israeli military for their knowledge of the land, fear the government now seeks to sever their ties to that same piece of earth.

Rumeihat and his fellow Bedouins see a plan to turn their land into a wildlife corridor as an affront to their service to the country. They say it’s in line with steps taken by nationalist governments against the Arab minority in recent years that have deepened a sense of estrangement and tested the community’s already brittle ties to the state.

The plan has sparked rare protests from Bedouins in the northern Galilee region — some of the few native Palestinians to embrace early Jewish settlers before Independence in 1948. Many have since served in the police and military, often fighting against fellow Palestinians.

“We were with you from the beginning,” said Rumeihat, standing next to a tombstone engraved with a Star of David in honor of a Bedouin tracker likely killed by a Palestinian. “We are like the lemon and the olive trees. How can you uproot us?” 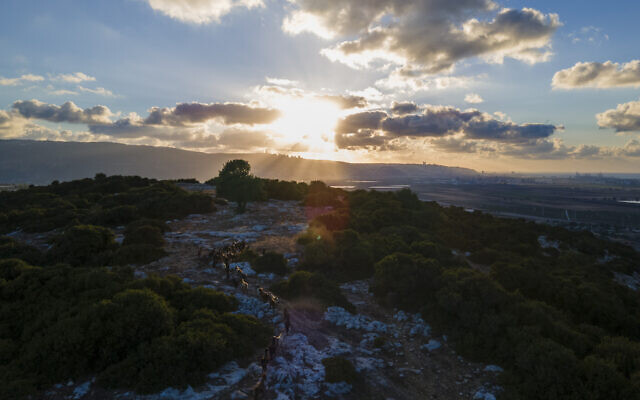 Goats gaze on a hillside where Bedouins have grazed their animals for generations near Rumihat in the Galilee region, Aug. 23, 2022. (AP Photo/Ariel Schalit)

Arab citizens make up 20 percent of Israel’s 9 million people. They have citizenship and can vote, and some reach the highest echelons of government and business. But they have long faced discrimination in housing, jobs and public services and face neglect at the hands of the state. Many Jewish citizens see them as a fifth column for their solidarity with the Palestinian cause.

Within that same minority are subgroups, like the Bedouins, who have become more embedded in Israeli society through their service in the security forces.

But in recent years, the Bedouins have accused Israel of belittling their service with its policies, particularly a 2018 law that defines the country as the nation-state of the Jewish people. Bedouin and Druze Israelis, some members of whose groups both serve in the military, felt the law demoted them to second-class citizens.

The community sees the wildlife corridor as another slight. It will set controls on their grazing and could limit the residents’ housing options in the future.

The Bedouins have started small weekly protests with Jewish supporters in the Galilee and also in Jerusalem, outside the offices of the prime minister and the Nature and Parks Authority. 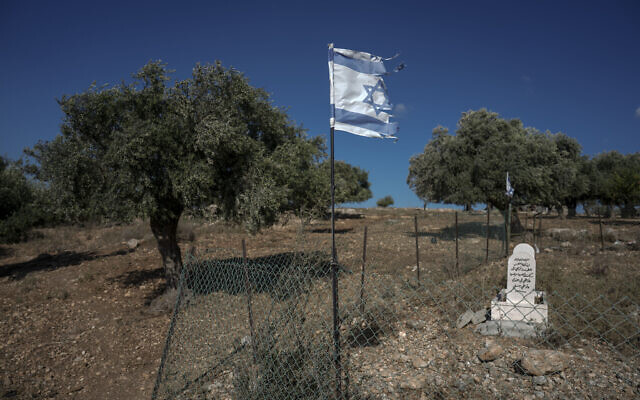 A half torn Israeli flag blown by the wind in a cemetery for Arab Bedouins who fell in the service of the State of Israel, near Zubaydat, in the Galilee region, Aug. 23, 2022. (AP/Ariel Schalit)

The 2,600-acre (1,050-hectare) wildlife corridor is meant to allow foxes, quail and other animals to move safely around the urban landscape of Haifa, the country’s third-largest city. The Bedouins call the lush ravines of the area al-Ghaba, or “the forest” in Arabic.

Environmentalists say wildlife corridors, which serve as safe migration zones for animals, are an important part of conservation efforts.

Uri Shanas, an ecology professor at the University of Haifa-Oranim, said the corridor was essential because the surrounding area is built up and the animals, especially the endangered mountain gazelle, require the land bridge. “The only place that it’s still thriving in the world is in Israel and we are obliged to protect it,” he said.

Arab citizens have in the past accused Israeli authorities of justifying land seizures under the guise of environmental stewardship. In January, Bedouins in the south staged protests against tree planting by nationalists on disputed land. And advocacy groups say many forests in the country were planted atop the ruins of Arab villages emptied during the events that led to the Jewish state’s creation.

A spokeswoman for the parks authority, Daniela Turgeman, said the corridor plan was crafted with local leaders in the 1980s and surveyed plants and animals. She said that it allows for controlled grazing and said there are only “a few individuals who still have objections.”

The Bedouins object to the plan’s omission of traditional land-use rights and reject any limits on grazing. They claim private ownership of certain parcels and total grazing rights after settling in the area about 100 years ago, buying land, planting olive groves and farms, and building homes.

They also deny there was any prior consultation with the parks authority, which Turgeman said formed the plan after six recent meetings and “a joint tour” with local leaders. 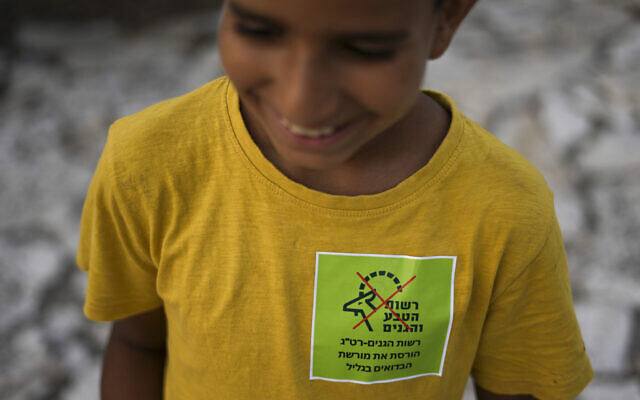 An Israeli Arab Bedouin boy has a sticker that reads ‘National Parks Authority destroys the Bedouins legacy in the Galilee’ during a protest in Zubaydat, August 31, 2022. (AP/Ariel Schalit)

Guy Alon, an official with the parks authority, told Channel 13 TV in July that the wildlife corridor would benefit Jews and Arabs while respecting property rights and striking an ecological balance.

For “Bedouins who come and say ‘we want open spaces,’ the nature reserve offers just that,” he said. “Those who ask that we let them graze on the land, we respect that,” he said.

After learning of the plan, three Bedouin villages filed an objection, charging the corridor didn’t take into consideration private Bedouin property. The Haifa district planning committee rejected that objection, and an appeal is now being heard.

“Nature has been used as a political tool before many, many times, so for people there is no trust,” said Myssana Morany, a lawyer with the Arab legal rights group Adalah, which filed the objection on the residents’ behalf.

She said the parks authority has dealt with the Bedouins differently than it has with other citizens, pointing to nearby examples of its plans to integrate nature reserves with existing farms and other types of land use.

Fatima Khaldi, 73, sitting in her large family home in the village of Khawaldeh, said local knowledge will protect the land more than any outside expertise. “Their whole goal is to remove us and destroy our heritage.”

Mustafa Rumeihat, 70, a distant relative of Rumeihat, said he’s worried his grandchildren won’t inherit the family ties to the land.

“I see myself dying of desperation,” he said, shuffling downhill from his pen of two dozen goats. “When my son asks me about the land, I won’t be able to answer him.”

Ref: Bedouin community fear Galilee conservation plan is part of a bid to 'uproot' them | The Times of Israel