Fauna and Flora International (FFI) is helping to finance the $21m (£15.8m) ridge to reef project, which is led by the UN’s development programme and aims to protect up to 800,000 acres of the country’s south-eastern Tanintharyi region from threats like poachers, loggers and palm oil companies.

But the project faces widespread opposition from ethnically Karen people who depend on the forests for their livelihoods. They fear it could convert their ancestral lands into protected areas, making it illegal for them to grow crops, fell trees to build homes, or forage and hunt for food.

And thousands of people displaced by conflict may have trouble resettling their lands in potential protected areas, according to the Conservation Alliance of Tanawtharyi (Cat), a coalition of local environmental groups.

They say the plan also threatens to upset a fragile 2012 ceasefire agreement between the rebel Karen National Union (KNU) and the Myanmar military because it would bring rebel-held land under government control.

Frank Momberg, FFI’s Myanmar programme director, said those fears were based on “misrepresentation and wrong information” about the project. The charity would not support including villagers’ land in protected areas, nor any other plans, without the consent of indigenous people and the KNU, he added.

Local communities, angry at being left in the dark, are unconvinced. “Why aren’t they transparent? None of us want this project,” said Tun Naing Oo of Hein Lai village, a remote cluster of about 80 wooden-stilted houses nestled between a range of cloud-capped hills and the swollen Lenya river.

“People in Britain giving money to FFI need to learn about the situation on the ground here,” said Daw Sabel, another local.

Hein Lai is one of 52 villages that could be affected by the project, which would involve training rangers to patrol protected areas equipped with specialist monitoring software.

Hein Lai’s residents only learned about the ridge to reef scheme, which was officially launched in July, because members of Cat made long journeys along dirt roads to tell them. This, say Cat, amounts to a “serious violation” of villagers’ rights because the project failed to get their free, prior and informed consent.

Consulting every village before the start of the project would have been impractical, said Mark Grindley, who manages FFI’s conservation programme in Tanintharyi. The plan was to get consent as needed over the project’s duration, he said.

But the charity’s staff will no longer be able to travel to Hein Lai and other villages because KNU officials are unlikely to grant them permission, he added. “I don’t think we’d be welcome.”

The dispute is part of a global pushback against the international conservation movement by forest-dwelling communities.

The UN special rapporteur on the rights of indigenous peoples, Victoria Tauli-Corpuz, said in a July report that despite “commitments by the world’s most influential conservation organisations” to respect indigenous rights, “little has changed”. She cited estimates that 250,000 people were forced from their homes, sometimes violently, between 1990 and 2014 after their lands were turned into protected areas.

Critics of ridge to reef note that there are still sporadic clashes between the KNU’s armed wing and the Myanmar military despite the 2012 ceasefire. That makes it especially irresponsible to push ahead with a model of conservation that has stoked global conflict, they say.

“It’s against the ceasefire agreement,” said Ah Oo, a representative from the KNU’s forestry department, referring to a clause that says the government must consult with rebels on any projects in contested areas that have a “major impact on civilians”.

Many of Hein Lai’s residents settled there after being forced from other villages during fighting. Shwe Thin remembers soldiers setting fire to his childhood home more than 20 years ago. Now, the prospect of protected areas causing territorial disputes makes him and his neighbours uneasy. “The KNU have not agreed to this project,” he said.

Grindley admitted that he and his FFI colleagues are “not really trained” in conflict sensitivity but said it is something they are “starting to take on board”. He declined to comment on calls by Cat and the KNU to suspend the project until displaced people have returned home and a comprehensive peace agreement has been secured. 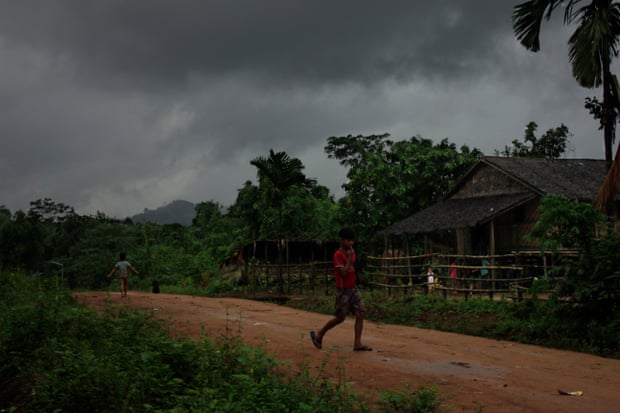 Win Naing Thaw, an official at Myanmar’s environment ministry, dismissed the calls. “If we wait for the peace process, who can be sure if the tigers and elephants will be left or not?” he said. “In July, two people killed a tiger in the Lenya area … we have a video clip.

“They oppose the ridge to reef programme, but what is their commitment to preserving nature, the tigers and elephants?”

But poaching tigers and elephants is already illegal, and campaigners at Cat say it is precisely because of indigenous conservation practices that there is so much pristine forest left to support these animals in the first place. They point to estimates that 80% of the world’s remaining healthy ecosystems are inside indigenous territory. “Without these communities, the globally important forests of Tanintharyi region would have disappeared long ago,” the group said in a report earlier this year.

Eh Pa Tha Law, executive director of Tanintharyi Friends, one of Cat’s seven members, said the best hope of protecting the forests lies in giving more control to local communities, and less to the central government or international NGOs. “There are currently too many consultants,” she said.

That sentiment is shared by villagers in Hein Lai. “This is our forest and our land,” said Daw Sabel. “We want to protect it ourselves.”