The TIPNIS - the Isiboro Secure Indigenous Territory and National Park - is both a national park and an autonomous territory held in common by the Yuracare, Moxeno and Chiman peoples.

Despite international requirements such as ILO Convention 169 and the UN Declaration on the Rights of Indigenous Peoples, governments often avoid engaging in informed consultations with their indigenous populations. 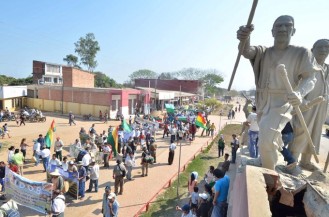 Indigenous groups from the lowlands of Bolivia have been marching since August 15, 2011 to protest the construction of a highway through protected territories. Over 1,500 protesters have joined the 375-mile trek from the Amazon lowlands to La Paz, pregnant women and children included. President Evo Morales response was to label them "enemies of the nation." He discredited protesters, portraying them as being confused by NGOs, and even denounced the march as another strategy of US imperialism. Although negotiations are in sight, what seems like a mere controversy over a local issue may in fact be representative of Latin America’s broader tensions with its indigenous population.

Building a highway through the TIPNIS

This is the latest in series of indigenous protests against megaprojects developed on indigenous lands without consultation. The TIPNIS - the Isiboro Secure Indigenous Territory and National Park - is both a national park and an autonomous territory held in common by the Yuracare, Moxeno and Chiman peoples. The Bolivian government contends that a highway through the TIPNIS is critical to the economic development of the nation. Indigenous groups oppose its passing through the heart of a conservation area on ancestral lands, and want the highway to be redirected around it.

The 190-mile highway would link the agricultural region of Beni with the commercial crossroads of Cochabamba. In addition to cutting travel time in half, the route strategically short-circuits Santa Cruz, a region that has staunchly opposed Morales' presidency.

Political allegiances play a crucial role, with settlers coming from the highland areas defending the project (through coca grower federations - key political allies of Morales). As settlers outnumber natives three to one, their quest for land has led to a tense cohabitation.

Ironically, Evo Morales helped create indigenous autonomy in the TIPNIS. In 1990, he was a union leader in the March for Territory and Dignity that placed indigenous autonomy on the political agenda. And it was under his presidency that Bolivia's 2009 constitution recognised collective indigenous rights.

A recent study estimates that 64 per cent of the TIPNIS will be deforested within 18 years. In addition to environmental stress, the road will facilitate land invasion by loggers and cocaleros, accelerating the disappearance of indigenous livelihoods in the area.

All the fuss is not only about the road. There is Brazil. Most importantly, there is oil. Brazil, Latin America’s hegemon, has a stake in the highway as part of its plan for a transoceanic corridor. A loan from the Brazilian bank BNDS is financing 80 per cent of the road, which is being constructed by a major Brazilian conglomerate that worked on other megaprojects in the region. In fact, the escalating conflicts over the highway pushed the Brazilian ambassador to freeze funds until the conflict with indigenous groups is resolved.

Then there is oil. The Morales government has repeatedly suggested that the further expansion of extractive industries and megaprojects is on his political agenda. In July, Bolivia’s Minister of Hydrocarbons and Energy, Jose Luis Gutierrez, announced the possibility of oil exploration in the TIPNIS, where reserves appear to be significant. The controversy goes well beyond the highway: It is about the access the highway provides for exploiting natural resources.

Despite international requirements such as ILO Convention 169 and the UN Declaration on the Rights of Indigenous Peoples, governments often avoid engaging in informed consultations with their indigenous populations. This denial of indigenous authority is violence, and it happens beyond Bolivia, too.

Drilling in the Alaskan Arctic may generate a less tangible commotion, but Peru’s eagerness to attract oil and mining investments has provoked several conflicts. There were over 100 deaths in the last three years (as well as billions in lost foreign investment). More than 30 people died in Bagua alone, in the Peruvian Amazon, where protesters invoked the right to clean water to demand the repeal of executive decrees for extractive industries made without consultation.

Two-thirds of Ecuador’s land in the Amazon area is zoned for oil concessions. These areas often overlap with autonomous territories. There, protests such as Dayuma’s were crushed with armed repression. As indigenous lands are increasingly under siege, Chile and Peru recently passed consultation laws requiring that native communities be consulted prior to building mines or drilling for oil.

What is at stake - yet again - is the government authority to proceed with extraction of natural resources on indigenous lands without consent. Many extractive plants operate near or within indigenous territories, without the basic minimum standards of safety and accountability. In fact, the latest report by the UN Special Rapporteur on the rights of indigenous peoples stresses that megaprojects and extractive industries are becoming the greatest challenges to the exercise of indigenous rights.

Beyond the issue of consultation, the TIPNIS case brings to light the conflicted relationship of Latin America’s New Left with indigenous autonomy. Indigenous rights are frequently violated, yet one does not expect exploitation to come from one's political allies. Evo Morales has run his presidency on indigenous credentials and organised the Summit for the Rights of Mother Earth in the aftermath of the Copenhagen talks. In Brazil, Lula focused his political agenda on social justice and gained world recognition for expanding political and social rights beyond economic elites. These two governments are at the forefront of social justice, yet they allied to build projects at the cost of native peoples.

The Bolivian government is determined and defiant. Although Morales entered negotiations, he warned that a consultation would not be binding nor influence the outcome of the project: “Whether they like it or not, we are going to build this highway”. To make things crystal-clear, his Vice-Minister of Decolonisation accused environmentalists and indigenous peoples of “fundamentalism”, and stressed that this would not be the only road built on protected parks to bring development to Bolivia.

Perhaps the most alarming aspect of the TIPNIS highway is that the New Left tends to move forward with “development projects” at the cost of indigenous rights. Just as neoliberal programmes did in the 1990s, leftist governments from Bolivia to Brazil continue to bypass indigenous consultation to open up protected territories to megaprojects by national and international corporations.

Manuela Picq has just completed her time as a visiting professor and research fellow at Amherst College. She is returning to the Amazon this autumn to continue her research on indigenous peoples' rights.

The views expressed in this article are the author's own and do not necessarily represent Al Jazeera's editorial policy.