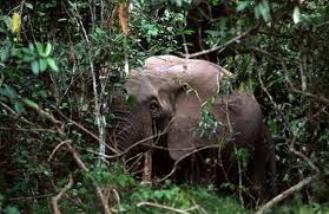 Fay gave a powerpoint presentation and White followed up with a video. Both described the extraordinary biodiversity of Gabon, and the possibility of setting up a series of national parks to protect that biodiversity and to promote eco-tourism.

They outlined 13 areas that could become national parks, and produced a map of Gabon with national parks covering 11% of the country. That was Fay and White’s long term goal. They were hoping to get at least one national park out of the meeting – the Lopé Reserve where White had spent two decades as a researcher.

At the same meeting, Colin Powell, then-U.S. Secretary of State, announced launch of the Congo Basin Forest Partnership (CBFP), and that the U.S. would contribute US$53 million to the Partnership. On his way home, Powell stopped off in Gabon, to meet President Bongo and to visit a forest with Mike Fay for a photo op.

Corruption and inequality in Gabon

Omar Bongo profited enormously from logging and oil operations in Gabon. As Keith Harmon Snow notes, “For forty-one years Bongo ran the country of Gabon as a private enterprise for himself, his family, his foreign backers and protectors.” When he died in 2009, Ali Bongo Ondimba, one of Omar Bongo’s sons, became President.

Ali Bongo has a huge collection of expensive cars. He owns several luxury properties in France. Via a shell company in the British Virgin Islands he is believed to own a Grade II listed Georgian house in London. He even owns a Boeing 777.

While Ali Bongo lives a life of luxury, one-third of the country’s 1.9 million citizens live below the poverty line.

At the end of September 2016, Ali Bongo was sworn in as Gabon’s President for a second seven-year term. His opponent Jean Ping alleged fraud, but the constitutional court controversially validated Ali Bongo’s narrow victory.

Bongo is “on the side of conservation”

In February 2014, at the London Conference on Illegal Wildlife Trade, WCS’s Lee White said that President Ali Bongo had been described as a despot, but added quickly, “he is on the side of conservation”. But what does Gabon’s model of conservation look like on the ground?

In its 2016 report “Protected areas in the Congo Basin: Failing both people and biodiversity?”, Rainforest Foundation UK produced a case study looking at Invindo National Park.

In July 2007, in a blatant breach of Gabon’s Environment Code, Chinese company China National Machinery and Equipment Import and Export Corporation (CMEC) began constructing a road through the Ivindo National Park to the Kongou Falls. A proposed dam at the site of the culturally important Kongou Falls would form part of the US$3.5 billion Bélinga mine development project, that in addition to the mine and dam, would include a railway and a deep-water port facility.

The impacts of Ivindo National Park on local communities

Rainforest Foundation UK outlines the impact of the park on local communities and indigenous people living near the park. Access to the park is severely limited. Communities were not consulted before the park was created, and are not involved in the management of the park. Conflicts between park managers and local communities include harassment, confiscation of game, and arrests.

Very few members of local communities have benefited from eco-tourism to the park. While eco-tourists visit the Kongou Falls, local communities are not allowed in this traditionally sacred area. Fishing is now restricted to one area: Bessaboka. Five villages all have to fish at Bessaboka, leading to overfishing and declining fish catches.

As a result of the restrictions on their livelihoods imposed by the park, communities have less food to eat. They also have less surplus food to sell, meaning less money for medicine and their children’s education. One of the villagers told Rainforest Foundation UK’s researchers that,

“Because of these restrictions we cannot go to hunt and fish to Kongou. Our activities are restricted to smaller zones and local people aren’t able to nourish their families easily any more.”

Rainforest Foundation UK found that local communities have been subjected to human rights abuses at the hands of the eco-guards patrolling the park:

“There is a young [man] who was brutalised by the park administration. He had gone to fish with a permit, but upon his return … he was confronted by [the park administration] who accused him of having fished outside the limits of Bessaboka. They took his fish and threw them in the water and started to beat him. They tied him to a tree full of ants and let these ants fall on him. After beating him they dropped him off at the entrance …”

The communities living near the Ivindo National Park are not opposed to protecting the forest, but they do want major changes in the way the park is managed. One villager told Rainforest Foundation UK that,

“We don’t think that the park is a bad thing in terms of conserving species; what bothers us is the way we are treated and the type of interaction that people from the park have with us.”