Human rights abuses complaint against WWF to be investigated by OECD.

In unprecedented move, OECD will look into allegations that world’s largest conservation organisation facilitated abuse of Baka people of Cameroon. 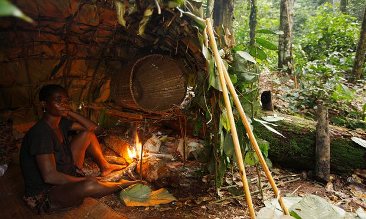 A human rights abuses complaint against WWF, the world’s largest conservation organisation, is to be examined by the Organisation for Economic Cooperation (OECD) in an unprecedented step.

Anti-poaching government “eco-guards” in the Cameroon rainforests, part-funded and logistically supported by WWF, are alleged to have destroyed camps and property belonging to the hunter-gatherer Baka people. The guards are accused of using physical force and threats of violence against the Baka people over a number of years.

Survival International, which campaigns for indigenous peoples’ rights, last yearsubmitted a 228-page formal complaint to the OECD in Switzerland, where WWF International is based, alleging that the Baka have also been denied access to their ancestral lands after the Cameroon government established protected areas “with the vital support of WWF”.

Under OECD guidelines, the complaint and dispute between Survival International and WWF will now be mediated by a Swiss government official. It is the first time the conduct of an international charity has been scrutinised under the OECD’s guidelines for multinational enterprises, which usually define responsible conduct for commercial companies.

Survival has documented Baka allegations of abuse. One Baka man last year told the charity: “[The anti-poaching eco-guards] beat the children as well as an elderly woman with machetes. My daughter is still unwell. They made her crouch down and they beat her everywhere – on her back, on her bottom, everywhere, with a machete.”

In a statement, WWF said it has worked strenuously to obtain improved rights for the Baka community but recognised that there was “clearly more work to be done”.

“WWF takes any and all allegations of human rights violations extremely seriously,” it said in a statement. “We have worked over the years to verify any alleged abuses, and we have taken all appropriate measures to address allegations brought to our attention, including communicating these to the appropriate authorities.”

WWF said its Cameroon branch had helped create the first Baka-managed community forest in south-east Cameroon and lobbied the government to improve the investigation and resolution of alleged abuse. WWF has also provided human rights training for government eco-guards and “facilitated” the employment of Baka people as ecoguards.

Frederick Kwame Kumah, director of WWF’s Africa regional office, told the Guardian: “Protecting the rights of local communities has been, and continues to be, a priority in all of WWF’s work. This is true in Africa, around the world and in Cameroon where we have worked during challenging times to develop ways of collaborating with indigenous peoples through direct engagement with the Baka people and other local communities.

Stephen Corry, director of Survival, said: “The OECD admitting our complaint is a giant step for vulnerable peoples. They can already use OECD guidelines to try and stop corporations riding roughshod over them, but this is the first time ever it’s agreed that the rules also apply to industrial-scale NGOs like WWF.”

The UN’s special rapporteur for the rights of indigenous peoples last year praised WWF-Cameroon for its work to get Cameroon’s government to improve the process of seeking consent from indigenous people for conservation measures. But Michael Hurran, Africa campaigner for Survival, said the charity hoped the mediation process would persuade WWF to “properly consult” in Cameroon.

“The aim of the complaint is to finally get WWF to speak to every Baka community, which is completely in line with its own principles,” said Hurran. “They visit Baka communities and have meetings but they’ve never properly consulted them about these protected areas on their land and the anti-poaching squads.”

WWF has voluntarily agreed to the mediation process in Switzerland although it said it disagreed with turning the OECD guidelines designed for commercial companies “into a mechanism for resolving issues between two non-profit organisations”.