but only when their rights are protected

The world’s healthiest tropical forests are located in protected Indigenous areas (PIAs), according to a new study.

“After accounting for location biases […], protected-Indigenous areas had the highest protective effect on forest integrity and the lowest land-use intensity relative to Indigenous lands, protected areas, and non-protected controls,” said the authors of the study published in Current Biology on October 27.

Healthy forests are highly biodiverse forests with minimal human modifications to its structure, composition, and function – thus maintaining the forest’s integrity or natural range. The study evaluated tropical forests in the Americas, Asia, and Africa using satellite and Anthromes datasets. The evaluation compared the integrity of forests located in PIAs – lands legally managed or owned by Indigenous communities – to regular protected areas, non-protected areas and Indigenous lands. The results were recurrently in the PIA’s favor. 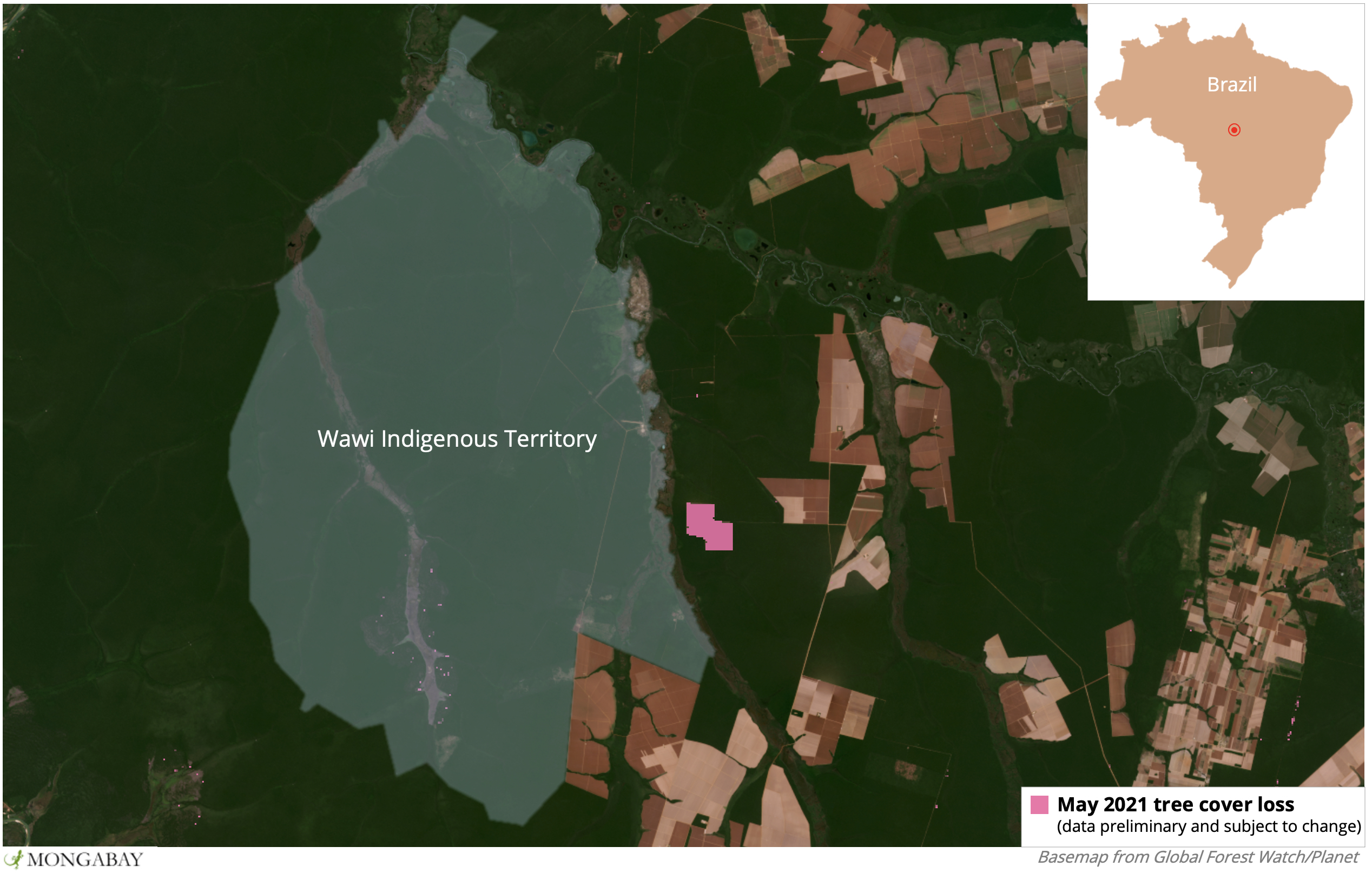 Satellite data from the University of Maryland visualized on Global Forest Watch show forest clearing for soy cultivation in May 2021 outside the protected Wawi Indigenous reserve, compared to inside.

According to researchers, these findings demonstrate that strengthening Indigenous peoples’ land rights is critical to reducing deforestation, global emissions and conserving intact and high-integrity forests. To accomplish this, support from governments is critical.

“The combined positive effects of state legislation and Indigenous presence in protected-Indigenous areas may contribute to maintaining tropical forest integrity,” stated the report.

It’s all in the protected status

Although studies have not yet confirmed why non-protected Indigenous lands in the Americas and Asia have high rates of deforestation and forest degradation, the authors believe this may be because the majority of mineral, oil, and gas deposits are located on Indigenous lands – with communities that often lack land tenure. 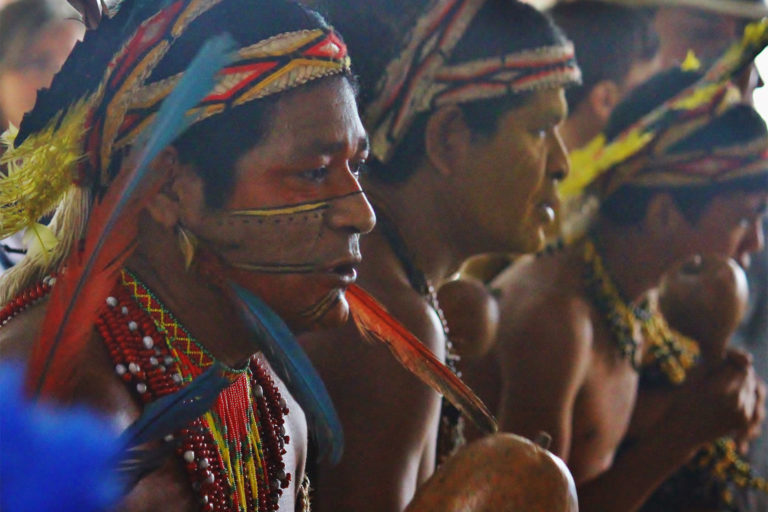 The Pataxó face both shrinking space for their subsistence livelihoods and an increase in conflicts as real estate and monoculture developments encroach on their territory. Image by André Mellagi via Flickr (CC BY-NC-ND 2.0). 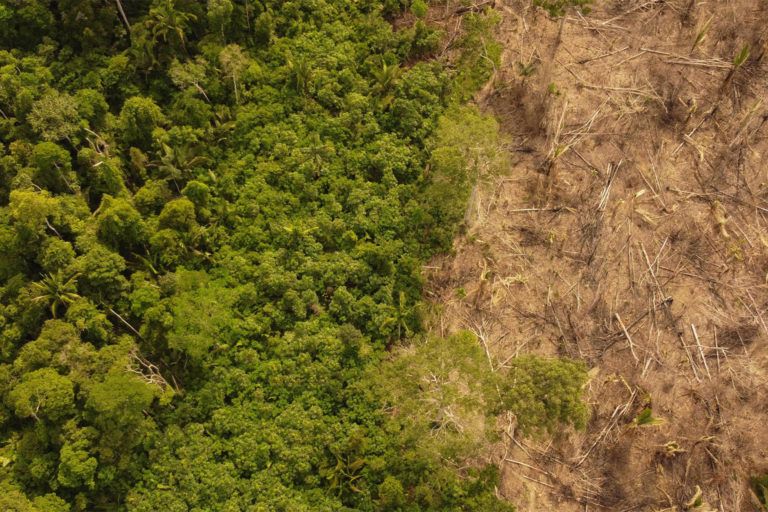 Aerial shot of deforestation in the Karipuna Indigenous Territory in the state of Rondônia, in November 2021. Photo by Alexandre Cruz Noronha/Amazônia Real (CC BY-NC-ND 2.0).

The researchers have another hypothesis to explain the results. The lack of status to protect a forested region, combined with increased pressures on communities to take part in global supply chains and leave behind traditional sustainable livelihoods has led some Indigenous people to actively take part in deforestation and poaching.

“[Indigenous groups] might reduce forest integrity through inadequately regulated timber use or the hunting of large-bodied, seed-dispersing vertebrates,” the authors said.

The researchers reinforce that the protected status and regulations, whether managed and governed by Indigenous communities or not, contribute to maintaining healthy forests.

Areas inhabited by non-Indigenous local communities that may be having a positive long-term relationship with their lands were not analyzed in this study.

Only 32.3% of high-integrity forests were considered as wildlands in 2010, according to researchers.

“In Africa and Asia, most high-integrity forests fall under cultured landscapes, reinforcing the fact that many areas of conservation importance are not truly wild and human-free but are home to human communities,” authors said. 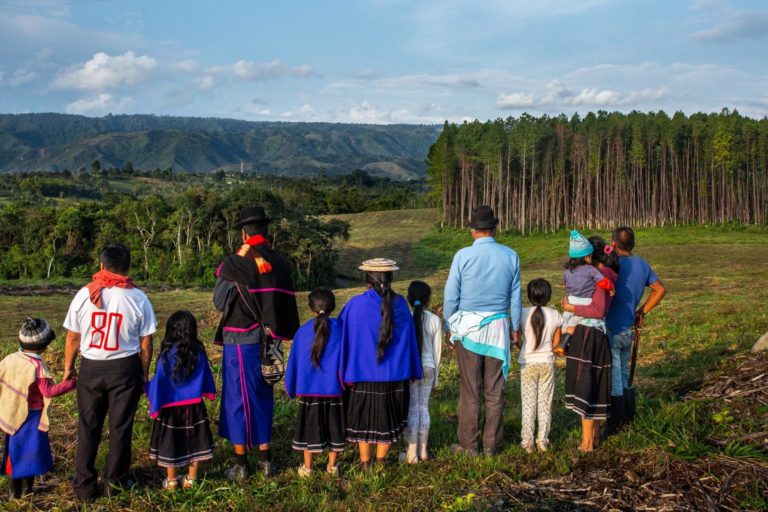 Misak women, men and children observe the contrast between the monoculture pine and eucalyptus plantation, on the right, and the natural forest in their territory, on the left, from a distance. Image courtesy of Antonio Cascio.

In the past decade, similar studies have also examined the relationship between Indigenous-led conservation, forest protection and protected areas.

According to a World Resources Institute report, Indigenous lands in the Brazilian Amazon experienced 0.6% deforestation, compared to 7% outside of them from 2000 to 2012. Another analysis of Indigenous territories in Brazil and community concessions in Guatemala’ Maya Biosphere Reserve found that securing community tenure is a low-cost, high-benefit investment that delivers great carbon storage.

According to another report, fulfilling the Paris Agreement won’t be possible without acknowledging and supporting the crucial role of IPLCs in protecting forests and carbon storage.

Indigenous peoples’ role in forest conservation and land restoration was highlighted at last year’s U.N. climate conference in the Glasgow Declaration of Forests and Land Use.  Over 20 governments and philanthropic entities pledged $1.7 billion to secure land tenure and forest rights for Indigenous peoples and local communities. 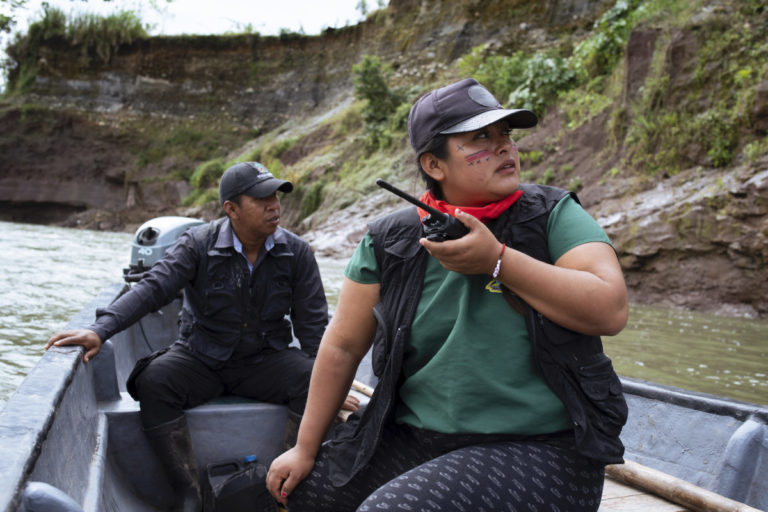 Alexandra Narváez and Holger Quenamá of the Indigenous Guard monitor and travel on the Aguarico River in a boat belonging to the Sinangoe Indigenous Guard. Imagehoto courtesy of the Goldman Environmental Prize.

Because of the intertwined relationship between forest communities and their environment, the researchers said government bodies should ensure they do not promote strict protected area models that exclude people from their ancestral territories.

This is a key cause, known as the 30 by 30 target, that Indigenous leaders are bringing to the table at the upcoming U.N. climate and biodiversity conferences. During both conferences, advocates hope to push for stronger recognition of their land rights and role in conserving forests.

In circumstances where there is an overlap between Indigenous lands and protected areas, conflicts and complex governance relationships tend to arise. A key example is the Betung Kerihun National Park in Indonesia. Its creation saw restrictions imposed on the Indigenous Dayaks contrary to their customary law, causing distrust and resentment against government authorities.

Another national park, the Kayan Mentarang is co-managed by Indigenous authorities, with their customary lands legally recognized.

“Yet even where conservation areas are, or appear to be, proposed, and managed by Indigenous communities, the relationship often remains tenuous due to histories of coloniality, and participation can remain representational,” said the authors.

Indigenous lands hold the world’s healthiest forests – but only when their rights are protected (mongabay.com)