The Horn Plateau, with its myriad of lakes, rivers and wetlands, has been a spiritual home for local Dehcho Dene peoples for millennia. In October, the Dehcho First Nations Assembly designated these lands and waters, called Edéhzhíe (eh-day-shae), as an Indigenous protected area (IPA), designed and managed or co-managed by Indigenous communities.

Edéhzhíe is a plateau that rises out of the Mackenzie Valley to the west of Great Slave Lake, in the southwestern part of the Northwest Territories. It covers 14,218 square kilometres. It is more than twice the size of Banff National Park.

I have worked in this region for a number of years, collaborating with communities on Indigenous food security programs. Elders have often referred to the significance of the Horn Plateau as a critical food harvesting location that has sustained communities for many generations.

As local communities encounter an ever-growing number of barriers to food security, including climate change and mounting costs of food production and shipping, it is increasingly clear that these lands must be protected from development.

Edéhzhíe is important to the Dehcho Dene culture, language and ways of life. By forming Edéhzhíe as an IPA, the management board, consisting of representatives from the Dehcho First Nations and Environment and Climate Change Canada, will make its decisions by consensus, and encourage Indigenous harvesting rights.

The Horn Plateau is a unique ecosystem that provides habitat for diverse wildlife, including a number of threatened species such as the boreal woodland caribou and wood bison. 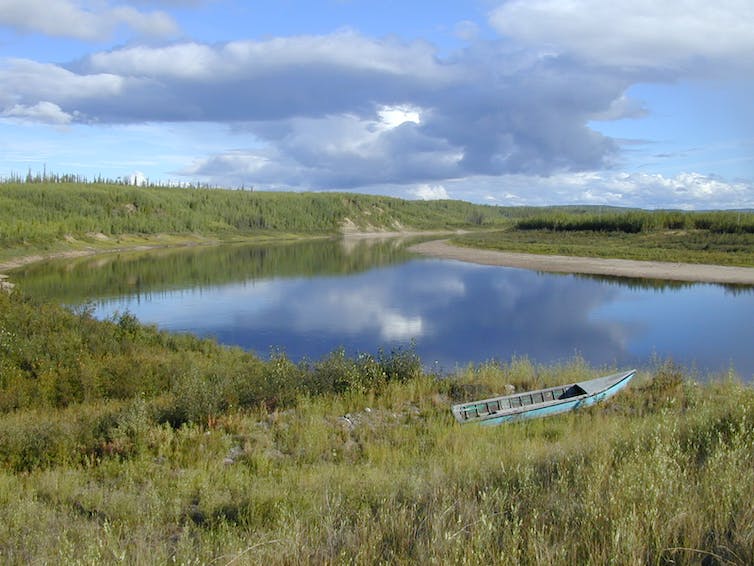 The Edéhzhíe Protected Area will encourage Dehcho Dene presence on the land. Government of Northwest Territories

Prime Minister Justin Trudeau included a $1.3-billion nature fund in the 2018 federal budget. It called for partnerships with corporate, not-for-profit, provincial and territorial partners. Edéhzhíe is the first IPA announced, and it will make a contribution to Canada’s international commitment to protecting 17 per cent of land and fresh water by 2020. It will also support Indigenous capacity to lead these processes to conserve land and the species that rely on it.

Canada has 77 different designations for its parks and protected areas. This complexity can lead to serious complications over land-use management decisions and the stakeholders invested in them. Co-management structures, where Indigenous and Crown governments partner to jointly share in the decision-making, only represent three per cent of our protected areas.

IPAs have been presented as a way forward for communities and conservation, but what are the risks and possibilities?

Lessons from Banff and the Canadian Rockies

A Dene Elder once emphasized to me that before we look forward, we need to understand where we came from.

For many Indigenous communities across the country, the histories of parks and protected areas are filled with experiences of displacement and cultural loss. 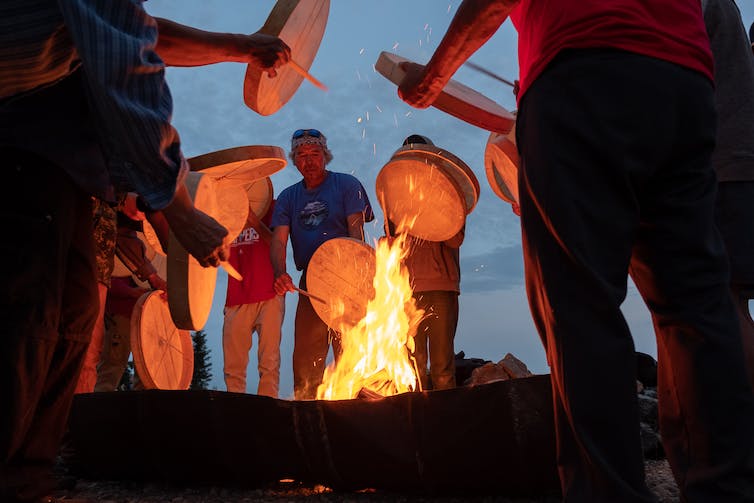 The Edéhzhíe region became a protected area under Dehcho law at the 2018 annual assembly. Henry Sabourin of Deh Gáh Got’îê First Nation in Fort Providence (centre) is an Elder and traditional knowledge holder, and has spent time in Edéhzhíe. (Amos Scott)

Canada’s first protected area, Banff National Park, plays a central role in the Canadian imaginary of what parks should represent: beauty, wilderness and conservation. This romantic view of Banff erases the traumatic legacies around the formation of the park.

Since 2004, I have been working with the Nakoda First Nation in Alberta to understand the impacts of the creation of Banff National Park on their communities. For much of that time, I recorded their struggles of being displaced from their traditional territories, beginning in 1885, and then being denied access throughout the first few decades of the 20th century.

This displacement and denied access was facilitated by park management and supported by the police, missionaries, government officials and tourism entrepreneurs. They were motivated by two objectives: to ensure that Nakoda subsistence practices of hunting, fishing and gathering did not interfere with growing tourism economies, and that Nakoda community members remained on reserves to be exposed to assimilatory institutions like the church and residential schools.

Similar to many Indigenous communities across the nation, Nakoda peoples are still healing from the separation from their sacred territories and the cultural repression they endured.

Despite these histories, change is possible, even in Banff.

The Nakoda have slowly, but insistently, increased their presence in the park. They began to return to sacred locations in 2001, gained plant and medicinal harvesting rights in 2004, became involved with elk culls in 2007, and the monitoring of grizzly bears in 2012. They led the Buffalo Treaty in 2015, which enabled new conservation partnerships around the reintroduction of bison to the park in 2017.

Indigenous models of conservation and stewardship

For the Dehcho First Nation, central to establishing Edéhzhíe was the expansion of Dehcho K’éhodiDehcho K’éhodi, a stewardship program where Dene guardians are responsible for many aspects of monitoring and management.

European-based conceptualizations of parks do not consider humans to be a fundamental part of a healthy ecosystem. It is time to rethink this approach.

Indigenous communities globally have millennia of experience with sustainable land use. IPAs are a step in the right direction precisely because Indigenous wildlife management and conservation practices are more holistic, inclusive of humans and their knowledge.

In British Columbia, after a landmark Supreme Court of Canada rulingfound the Tsilhqot’in (Chil-co-tin) peoples have title to traditional territories, Dasiqox Tribal Park was established in 2017.

This new designation of park covers 3,120 sq. km. It protects the cultural and ecological values of the Tsilhqot’in as it asserts land rights on the basis of Indigenous law. This provides an alternative model of governance and land management. 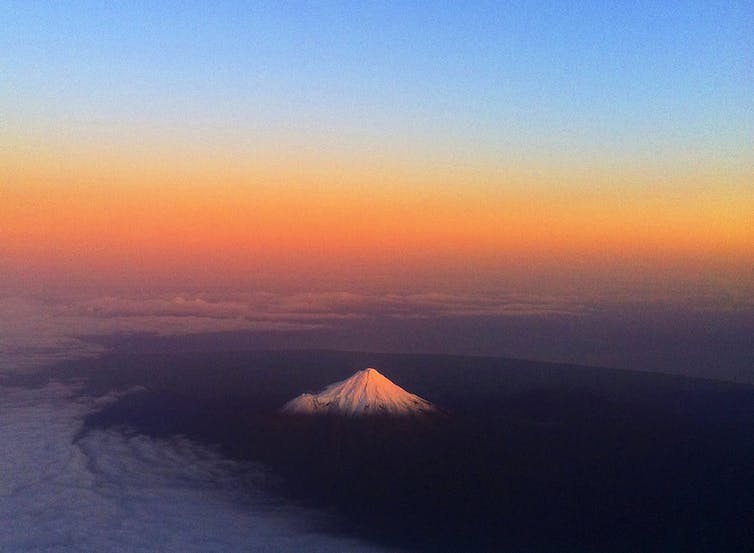 Mount Taranaki in New Zealand will be granted the same legal rights as a person. (David Frampton/AP Photo)

There, the federal government returned Te Urewera, a former national park, to the Tūhoe peoples in 2014. This park then became its own legal entity, where Tūhoe are the only decision makers. In 2017, the Whanganui River became the second natural resource in New Zealand to attain a legal identity, with the rights, duties and liabilities of a person.

What is the future of conservation and IPAs?

Providing personhood status to parks may seem like a stretch, but it’s not. In the United States, corporations are granted personhood status to protect their bottom line. I would suggest that New Zealanders, led by Māori leaders, have their priorities straight. Maybe someday Canadians can learn by these examples and follow suit.

Learning from diverse Indigenous approaches to conservation is valuable, however, taking responsibility for repressive colonial policies is vital.

Histories of displacement in parks are directly linked to the contemporary issues faced by many Indigenous communities across the country, including gross health inequalities and disproportionate levels of food insecurity. There is a need to acknowledge how these colonial histories have impacted land-use management decisions and become a barrier to conservation.

IPAs can help Indigenous and non-Indigenous people in Canada foster alliances and navigate political corridors together for the betterment of both ecosystems and local peoples. In my mind, IPAs can be a fundamental part of the process to reconcile the past and welcome the next generation of conservation.