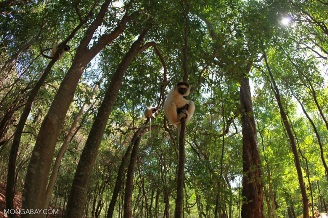 In principle, new investment in protected areas and REDD+ projects, by the World Bank and other international donors, are tied to strong social safeguards. These should be designed to ensure that a project does no harm and respects the rights of indigenous peoples and local communities. At present, UN climate change convention safeguards go further and require carbon funding to provide additional social and ‘non-carbon’ benefits, though World Bank safeguards still fall short of this.

New research in the eastern rainforest of Madagascar has demonstrated that a protected area and a REDD+ project are failing to even compensate forest dwellers most affected by new restrictions imposed on their traditional livelihoods. The research team, from the University of Antananarivo and Bangor University in the UK, were investigating how social safeguards have been implemented around a new 382,000 ha protected area and REDD+ pilot project in the Corridor Ankeniheny-Zahamena (CAZ), led by Conservation International with World Bank funding.

Dr Mahesh Poudyal of Bangor University says:  “Compensation is supposed to reach the people most negatively impacted by conservation and take account of particularly poor or vulnerable people. We have found that the compensation has disproportionately reached those more easily accessible (such as those who live closer to local administrative centres), who are relatively better off, and who have positions of authority locally. While this won’t surprise anyone familiar with the common issues of elite capture in development projects, we think it is very a significant finding especially at this stage in the global process of developing safeguard systems for new REDD+ projects.”

Prof. Julia Jones, also of Bangor University, explained in a recent BBC interview, that “We have mapped every single household that should have been covered by the compensation and have shown that… the process had some very serious biases in it. Essentially, the people that were identified were easier to reach physically – such as closer to the road or closer to the administrative centre. They also tended to be more socially connected; members of local forestry management committees, and they were – on average – richer or, at least, less poor.”

The researchers identify three issues which make it difficult for a social safeguard assessment to effectively target the right households for compensation: (a) poor information on location of communities and challenging access means that information does not reach remote households; (b) reluctance of people dependant on shifting agriculture to reveal this due to government sanctions; and (c) reliance by safeguard assessors on non-representative local institutions. They suggest that in cases where the majority of households are likely to bear costs from a carbon project and where identification of affected households is challenging, the optimal, and principled, strategy may be blanket compensation offered to all the households in affected communities.

Professor Bruno Ramamonjisoa from the University of Antananarivo says “Madagascar’s forests are incredibly valuable and should be protected. However for conservation to be successful local people need to be included and need opportunities to benefit from the conservation and must not be made poorer by it.”

Ultimately, safeguards will be prone to failure unless affected communities and rights holders are aware of their rights and enabled to seek redress where safeguards fail. This research shows that existing safeguard commitments are not always being fulfilled and those implementing social safeguards in REDD+ should not continue with business as usual.

When it comes to local livelihoods, forest and climate projects must uphold relevant international standards and country obligations, including under Article 10(c) of the CBD, which requires Parties to protect sustainable customary use of forests and other biological resources. This obligation covers shifting cultivation systems that are often sustainable. The onus is on the project developer and host government to recognise and protect land and livelihood rights. If restrictions are proposed on farming or other local livelihood practices, these must be proven to be unsustainable up front. At the same time, for indigenous and tribal peoples the core standard of FPIC must be applied to any proposals to limit livelihood rights and cultural practices or any measures that might impact on the right to food. In short, limiting local livelihood must be a last resort and strictly subject to prior agreement with communities through their freely chosen representatives.