Kenya has a history of land-grabbing by senior government officials, particularly during Daniel arap Moi's time in power. Land disputes are common as legal documents of ownership are often missing or have been forged. 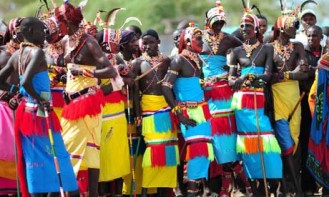 Members of the Samburu people in Kenya have been abused, beaten and raped by police after the land they lived on for two decades was sold to two US-based wildlife charities, a rights group and community leader have alleged.

The dispute centres on Eland Downs in Laikipia, a lush area near Mount Kenya. At least three people are said to have died during the row, including a child who was eaten by a lion after the Samburu were violently evicted in November last year.

The London-based NGO Survival International said the Samburu were evicted following the purchase of the land by two American-based charities, the Nature Conservancy and the African Wildlife Foundation.

The groups subsequently gifted the land to Kenya for a national park, to be called Laikipia National Park.

Survival International said the land was officially owned by former president Daniel arap Moi, although AWF simply said it bought it from a private landowner.

With nowhere to go, around 2,000 Samburu families stayed on the edge of the disputed territory, living in makeshift squats, while 1,000 others were forced to relocate, Survival said.

Jo Woodman, a campaigner for Survival, said the pastoralist Samburu had reported constant harassment from police with women allegedly raped, animals seized and an elder shot as recently as last month.

"There has been an ongoing, constant level of fear, intimidation and violence towards the community, which has been devastating," Woodman said.

A community leader, who did not wish to be named, described police harassment as enormous. He said police beat people, burned manyattas or traditional homesteads and carried out arbitrary arrests during the period leading up to and including the eviction last year. He said they also confiscated many animals and the intimidation has continued.

"The situation has been really bad for a long time," he said. "[The Samburu] have nothing. Things like bedding and utensils were burned."

Kenyan police were not available on Wednesday to comment on the allegations.

Survival has written to the UN appealing for urgent action to put an end to the violence and provide assistance to the Samburu, who have gone to court to establish their right to the land.

"In one incident, a Samburu elder was shot dead by paramilitaries," the group said in its letter to the UN committee on the elimination of racial discrimination, dated 7 December.

"The displaced community has nothing but their livestock, thousands of which were impounded – with no reason given – on 25 November 2011. This is an urgent and serious violation of the rights of this community, which has been left squatting beside its land with no amenities," Survival's letter said.

The two conservation groups gifted the 17,100 acres to Kenya's government in November to create a national park to be run by the Kenya Wildlife Service.

However, since then a court has banned the KWS from proceeding with the conservation project until a ruling on the Samburus' legal case.

Both US-based charities indicated they were watching the situation with concern but were unable to comment for legal reasons.

John Butler, director of marketing for the AWF, said: "The African Wildlife Foundation does not condone violence. AWF has a longstanding history of working closely with local communities to ensure that conservation solutions benefit both people and wildlife. Unfortunately, we cannot comment at length on this issue due to a pending court case in Kenya."

Blythe Thomas, a spokeswoman for the Nature Conservancy, said: "The conflict over natural resources across Africa is a serious issue. Everywhere we work in Africa, we're working with local communities to address natural resource issues. We're closely monitoring this situation; unfortunately we can't comment at length due to a pending court case in Kenya."

Kenya has a history of land-grabbing by senior government officials, particularly during Daniel arap Moi's time in power. Land disputes are common as legal documents of ownership are often missing or have been forged.

A request for comment from Kenya's Ministry of Forestry and Wildlife went unanswered. However the minister, Dr Noah Wekesa, was quoted as telling parliament last month that KWS had ceased all activity on the land, which would not be gazetted as a national park until the other legal case was resolved.

The Samburu's legal case was heard in the town of Nyeri on Wednesday and lawyer Korir Sing'Oei said the court confirmed that the KWS had secured registration of the land.

The court had agreed to give further direction on the matter in January.

Korir Sing'Oei said he intended to address the violations of rights in a separate case.

"Last year, when the community was forcefully evicted from the land ... their homes were burnt down and livestock confiscated in their hundreds and lots of their women were violated," he said.

"Given the powerful actors who have vested interests in the land, this issue has been really hushed up in the local media," he added.

The lawyer said the evicted Samburu had no intention of leaving Laikipia, a popular destination for wildlife-loving tourists and the area where Prince William proposed to Kate Middleton in a rustic lodge.

"Where would they go to? They have absolutely nowhere else to go," he said.

The community elder said running away was not an option.

"That's the place you call your home ... it's where you were brought up and where your children call home. It's an ancestral land."