Twenty Maasai pastoralists from northern Tanzania have been charged with the murder of a police officer during protests over government plans to use their ancestral land for conservation and a luxury hunting reserve.

The officer was allegedly shot by an arrow on 10 June while attempting to demarcate land in Loliondo, which borders Serengeti national park.

Lawyers from the Tanzanian Human Rights Defenders Coalition say a group of Maasai leaders were arrested on 9 June when they were called in for talks with the area district commissioner about the government’s move to remove them from the land. The men were accused of inciting the community, arrested and transferred to a prison in Arusha, where they were detained for a week without access to a lawyer.

On 16 June, the men were brought before a court and charged with murder, along with 10 other men arrested last week.

The men’s lawyer, Paul Kisabo, said the charges were “politically motivated” and designed to intimidate the Maasai, as half his clients were arrested before the police officer was killed. “It doesn’t add up,” he said. He believed the government would drop the charges.

More than 70,000 Maasai face eviction from land in Loliondo. They have been under threat of eviction since 2012 but previous efforts to force them from their land were thwarted.

Members of the community say they found out in January that there were renewed efforts to remove them from 1,500 sq km (540 sq miles) of land to make way for a game reserve, to be operated by a UAE-owned company. At the start of June, military and paramilitary forces arrived in the area to erect concrete boundary posts.

A ruling from the east African court of justice to determine ownership over the disputed land was expected on Wednesday, but has been postponed until September. The case was filed in 2017 by people from four of the 14 villages in Loliondo. In 2018, the court issued interim orders blocking the government from taking any action on the land until it made a ruling on the case.

“The government was moving quickly to pre-empt any judgment in our favour,” said Samuel Nangiria, a pastoralist and grassroots activist from Loliondo, who fled to Kenya after the eviction protests.

The government maintains that it is only repurposing 1,500 sq km of the land for conservation while leaving the rest to the Maasai.

Donald Dey, a lawyer for the Maasai community, said while the Tanzanian government can acquire land compulsorily when it is needed for a public purpose, it had not followed the correct legal process.

“In principle, all governments in the world can compulsorily acquire land in the public interest. But for that to be done, there are laid-down procedures and laws – including Tanzanian national law, around free, prior and informed consent, which has not been done.” 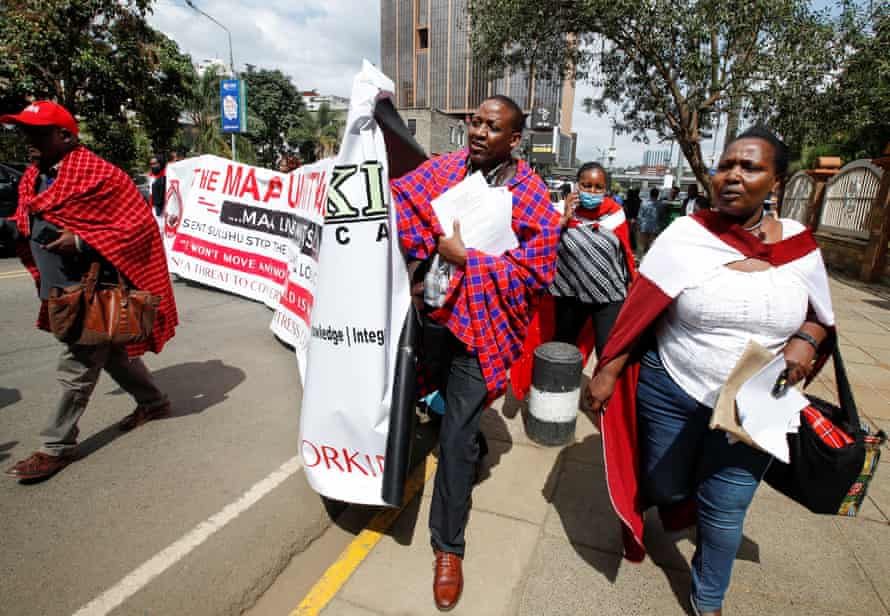 Members of the Maasai community in Nairobi, Kenya, march in solidarity with Maasai being evicted from their ancestral land in Tanzania, 17 June 2022. Photograph: Monicah Mwangi/Reuters

Nangiria said the latest eviction efforts were “extremely violent”. He said about 2,100 Maasai had escaped to Kenya, fearing for their lives. They are being supported by other Maasai communities along the border in Narok, with some Kenyan families hosting as many as nine people from Tanzania.

“The situation is really bad. Some people have no food or a place to stay. Many women have really young children with them, and the area has barely any public health facilities,” said Nangiria. “My grandparents and their parents lived in Loliondo. Where are we to go?”

Last Friday, Kenyan Maasai held a peaceful march to the Tanzanian high commission in Nairobi, which was brought to a halt after organisers were arrested for not having a permit.

A Maa Unity Agenda leader, who asked to remain anonymous, said the march was to show solidarity with the Tanzanian community. “As far as the Maa community is concerned, we don’t have a border between Kenya and Tanzania. We cross over when there’s greener pasture there and they cross over when rains are heavier here, so we interact a lot and were really affected to hear what’s going on in Loliondo.” 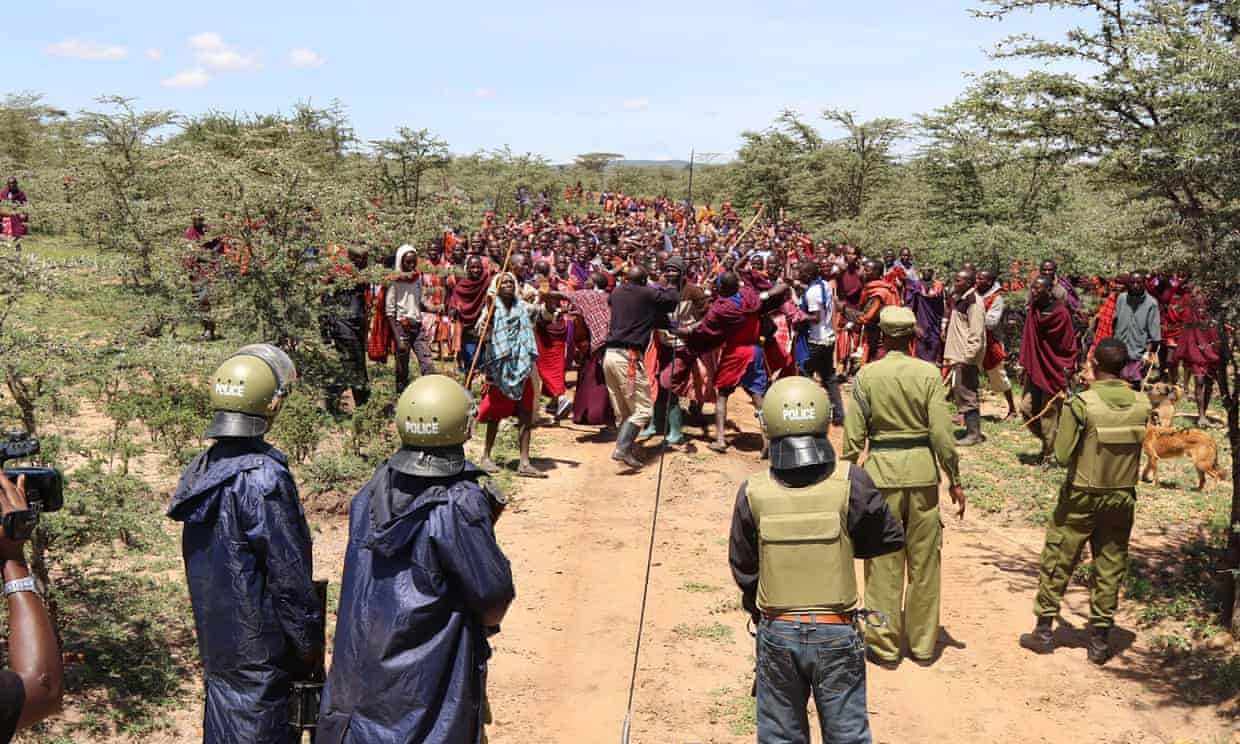 Maasai and government troops in Loliondo, where protests over eviction from their land turned violent earlier this month. Photograph: Handout