Erdenebat Chuluu, a nomadic herder, shouts words of encouragement to the reindeer he is riding.

“Chu!, Chu!,” he calls, as he urges the animal out of a cedar wood and onto a plain in the southern reaches of the Mongolian Taiga, a predominantly forested area some 200 km from the nearest paved road.

Once in the open, the beast and its rider gingerly step over fallen trees and navigate creeks of melted snow, seemingly oblivious to a late winter chill.

Chuluu has lived all his life in the centuries-old tradition of his Dukha ancestors, renowned for their reindeer-herding and hunter-gathering skills in the forests of the rugged Sayan Mountains straddling the Russian border.

But the Dukha fear they are losing their identity in the face of a conservation order by the government that bans unlicensed hunting on most of their traditional land. 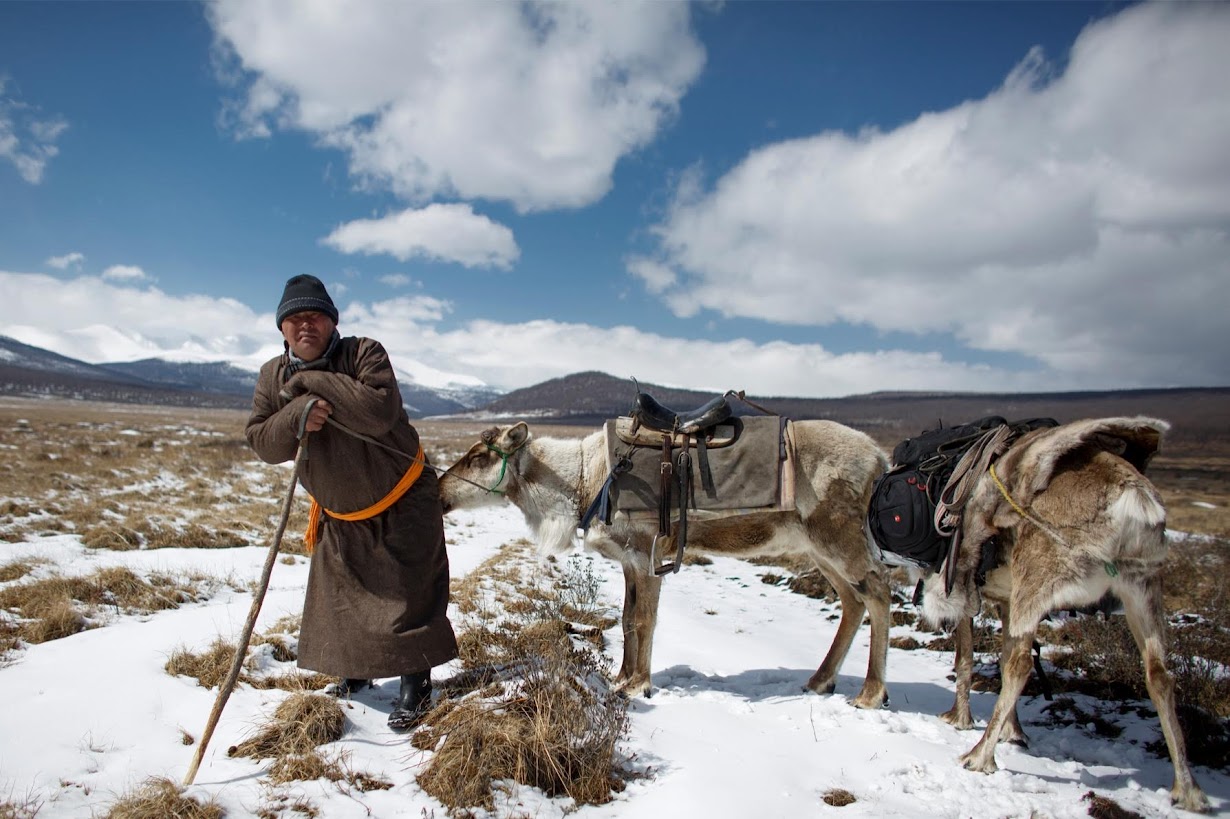 Reindeer outdo horses in this steep and snowy terrain and have allowed the Dukha to evade many of the upheavals that have historically afflicted people in the lowlands, from Genghis Khan to Communism.

Chuluu’s people, around 280 of them, are spread out across 59 households, about a day’s ride from the village of Tsagaannuur.

“It’s our will to maintain the tradition of herding the reindeer in the same way as our ancestors did,” Chuluu told Reuters in April. 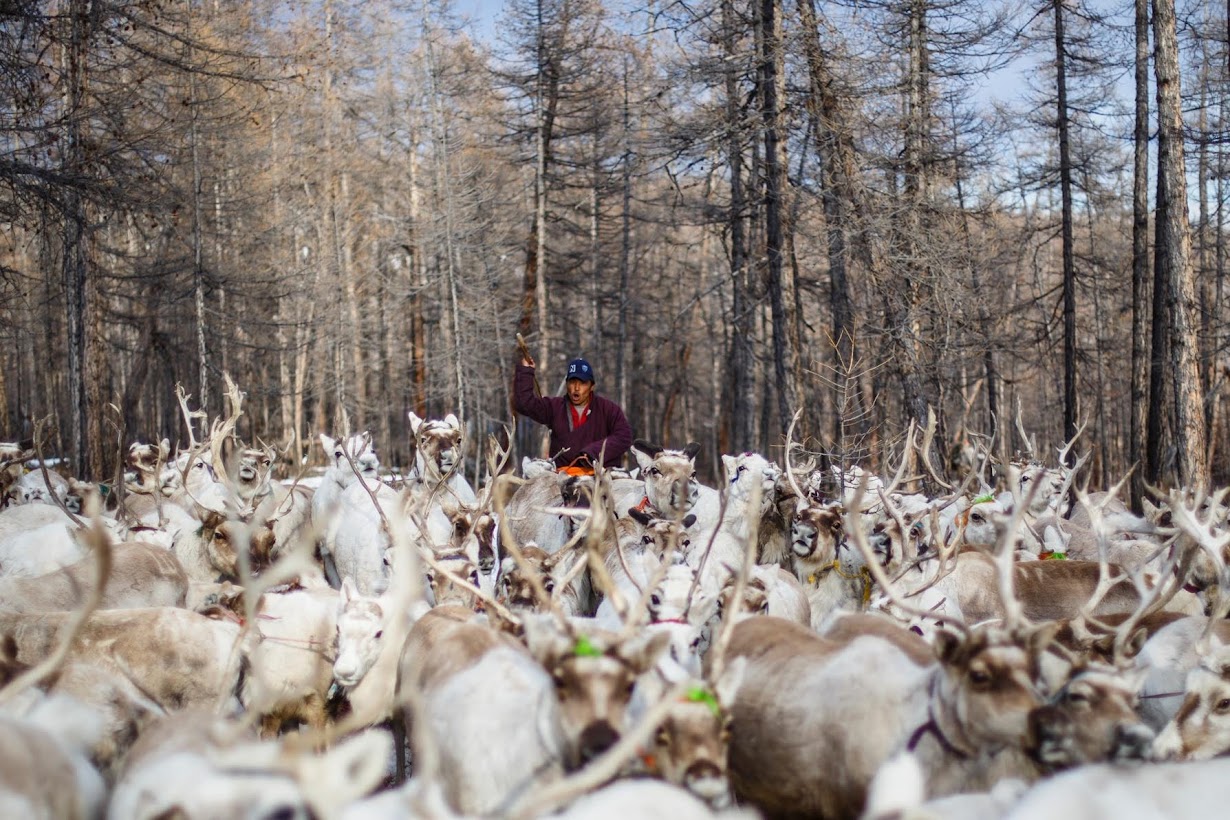 A Dukha nomad drives a herd of reindeer.

In 2012, Mongolia’s government designated the majority of the Dukha’s traditional herding grounds as part of a national park in an attempt to protect an eco-system ravaged in the preceding couple of decades.

During that period, a Soviet-era quota system for hunting, which had provided a living for people like the Dukha and maintained wildlife numbers, broke down. The Dukha and other locals began to aggressively hunt animals like moose and red deer for the Chinese market, seriously depleting their numbers.

Now, the government pays the herders a monthly handout to compensate for the hunting ban, but many Dukha feel they have lost half of their identity.

The hunting tradition has always defined a man in the Taiga, said Chuluu’s neighbor.

“It feels like we’ve lost something because we can’t move to whichever area we like in this land, which has been handed down to us from our ancestors,” said Naran-Erdene Bayar, 26.

The head ranger of the National Park, Tumursukh Jal, grew up in the area and knows the Dukha’s history well. He insisted they must follow the law.

“It’s not about Dukha or Mongolian, it’s about people illegally hunting,” he said.

Meanwhile, on the Taiga, herders release hundreds of reindeer from a pen to graze.

After lifting the beams of the hold, the herd pours into the clearing and the animals, snouts nuzzling the snow-covered ground in search of moss, disappear from view as the evening light fades. 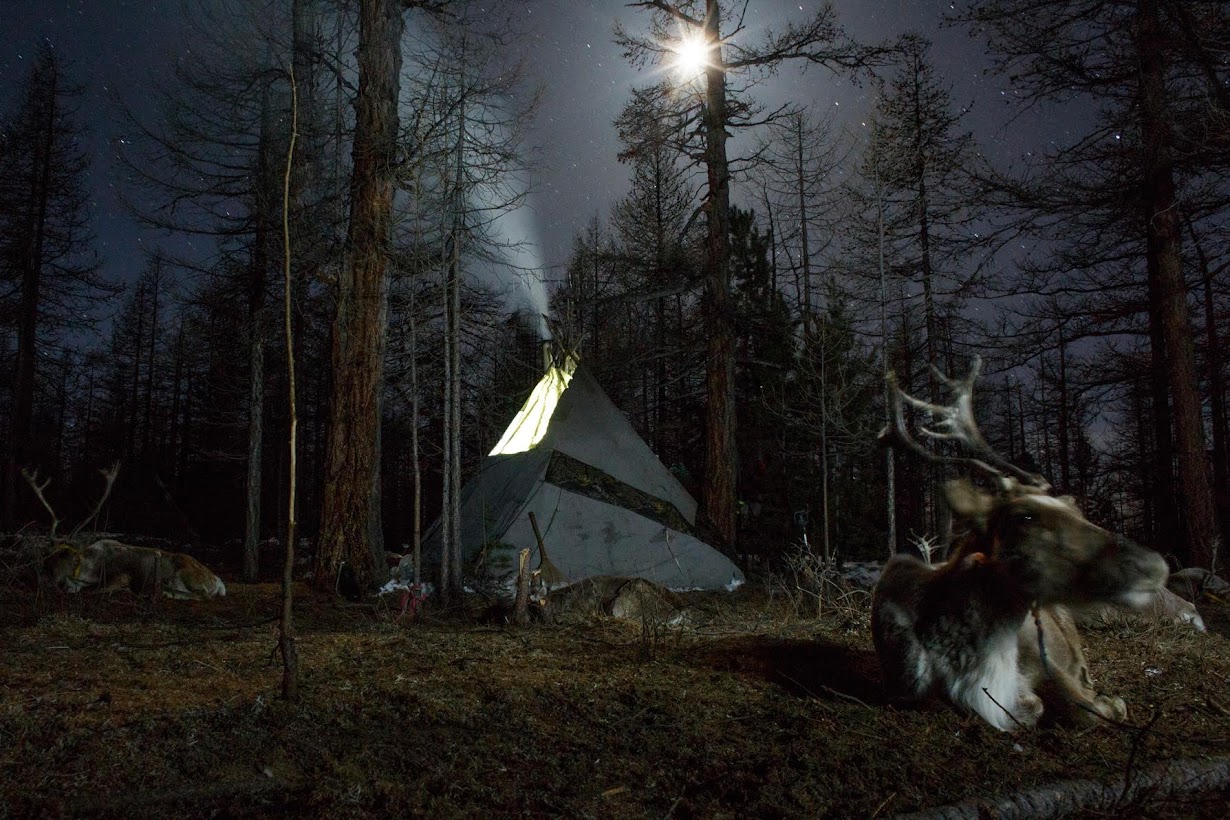 Smoke rises from the chimney of the family tent of Erdenebat Chuluu.