Leaders of Bolivia's indigenous and environmental movements are staging emergency protests as the country's Senate meets to approve a law that would strip protections from the Isiboro Sécure National Park and Indigenous Territory (known by its Spanish acronym TIPNIS). The draft law would revoke the protections won by a 2011 National Indigenous March, authorize a highway that divides the park in two, and further the process of illegal deforestation that threatens to permanently damage the territory in the Amazon rainforest.

The legislation was introduced on July 3rd, and passed through the Chamber of Deputies on July 30th. After a brief Senate committee meeting that same day, it will go before the Bolivian Senate today. 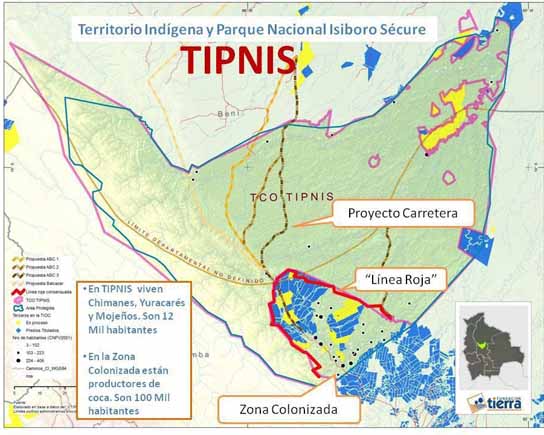 Protests occurred throughout the last week in La Paz, Trinidad, Santa Cruz, San Ignacio de Moxos, and Cochabamba, organized by the Confederation of Indigenous Peoples of Bolivia, the Fundación Solón (led by former UN Ambassador Pablo Solón), environmentalists, feminists, and indigenous solidarity activists. Protests continue today in La Paz, coinciding with the scheduled opening of the Senate session; with vigils in Santa Cruz de la Sierra and Trinidad (Beni Department); and in Cochabamba, where activists will gather for a "direct action" demonstration at 7 pm.

Opponents question both the route of the highway and the model of development that the government is pursuing. "The most advanced countries of the 21st century will be those who manage to preserve, regenerate, and live with nature," former Ambassador to the UN Pablo Solón wrote recently, "A country without forests and with dry or contaminated rivers will be more vulnerable to growing environmental impacts."

The ruling Movement Toward Socialism (MAS) party of President Evo Morales has thrown its weight behind the legislation, and it holds a two-thirds majority in the Senate. Opposing the legislation are the opposition Democratic Unity Coalition and Christian Democratic Party, along with seven ‘Civic Committees' (large civil society organizations), which have called for the highway to built outside of TIPNIS. The Bolivian Environmental Forum, renowned scholars Xavier Albó and Silvia Rivera Cusicanqui, and Catholic Archbishop have all also spoken out against the draft law.

A study by the Bolivian Institute for Strategic Research (PIEB) found that the road would accelerate deforestation by increasing access to the territory for illegal loggers as well as agricultural colonizers. It projected deforestation of 64% of the park within fifteen years if the road was built, a major increase from the already-worrisome projection of 43% loss without the road. While the new law increases penalties for illegally occupying land the park, the government is incapable of effectively preventing deforestation. In recent years, 87% of all deforestation in Bolivia happened illegally – according to government reporting – and the Isiboro Sécure and Carrasco national parks are leading locations for unauthorized coca cultivation, according to a recently released UN report.

From 1986 to 2006, colonization of the park degraded nearly 32,000 hectares of forest and created a 120,000 hectare colonized zone ("Polygon 7"), which is now inhabited by coca growers and excluded from the collective title held by the Subcentral TIPNIS. While the highway could provide an export corridor for coca leaves and narcotics towards Brazil, it is of limited use to the Mojeño-Trinitario, Tsimané, and Yuracaré indigenous communities within TIPNIS. Most of these communities are located to the east of the proposed road corridor, and their main form of transportation is boats on the Isiboro and Sécure Rivers and their tributaries. "We have our rivers, which are our highways," Marqueza Teco has said. These communities have engaged in sustainable export of cacao for fair-trade chocolate and crocodile leather, without the need for a major roadway. Most promised benefits of the highway, including schooling and medical care, must still arrive by water and could be provided by the state whether or not the highway is built.

The government claims the new law is the fruit of a consultation process it organized in 2012, but that process has been discredited by international and local human right experts. During that process, residents were given a choice between the complete cessation of economic activities and revoking the 2011 protective law, and even communities that requested the highway be built outside of TIPNIS were counted as "yes" votes for the highway. Government "consultation teams" arrived with gifts, such as outboard motors, promises of development, and surveys of community needs. The International Federation for Human Rights and the Defensoría del Pueblo, an official human rights monitoring body, concluded that the government's process was neither free nor informed nor fair.

The current controversy over the proposed law has brought new scrutiny on the Bolivian government. This week, the Bolivian newspaper El Deber confirmed reports by TIPNIS community members that government contractors are already building bridges within the territory that would form part of the Segment 2 of the highway, in violation of the 2011 law.