REDD (Reducing Emission from Deforestation and Forest Degradation) is a U.N. program which uses financial incentives to encourage governments and companies in developing countries to offset their CO2 emissions, significantly reduce their greenhouse gas emissions and conserve trees whilst respecting the interests of all stakeholders. 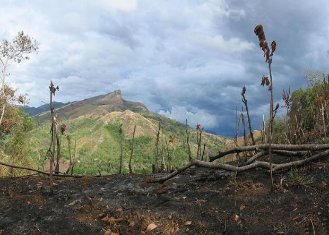 However, accusations have been made by numerous indigenous activist groups and environmental organizations that REDD fulfils neither of these aims.

As stated in a report published by a collection of eight environmental and indigenous rights organizations, REDD’s approach to reducing carbon emissions permits the planting of mass scale commercial forests. The report explains that REDD allows commercial forestry on the condition that the corporations involved demonstrate that the new forests contain equal amounts of carbon to the previous forest; thereby, balancing out their carbon emissions. However, according to the report, this technique of ‘offsetting’ carbon emissions by planting (or replanting) trees is futile.

The report states: “The United Nations definition of “forest” does not distinguish between a tropical old-growth forest and an industrial monoculture tree plantation. As far as the U.N. is concerned, both are forests. This means that if someone is able to demonstrate that a plantation can store more carbon than an existing forest, the conversion of this forest into a plantation will receive the blessing of the U.N. and the forest’s destruction will be subsidized through REDD.”

Moreover, the process of planting commercial forests often ends in the displacement of indigenous people from their ancestral lands. For example, as recounted by Tom Goldtooth of the Indigenous Environmental Network, in Papua New Guinea, carbon traders have been criticized for coercing indigenous people into signing their lands over to U.N. REDD.

According to the report, REDD also allows logging ‘leakages’, whereby logging activities are merely removed from their original site to an area of forest adjacent to an area sectioned off for conservation. Companies are allowed to continue their activities as long as they remain external to conservation parks, says the report.

For example, in Bolivia, loggers were forced off one area of land sectioned for conservation, after which, logging companies simply bought new areas of land elsewhere. Thus, the program does not help in tackling the root causes of illegal logging, which includes logging without a license or in conservation areas; harvesting in excess of quotas; processing logs without a license; tax avoidance; or exporting wood without paying the required duties.

Furthermore, according to the report, only those countries actively participating in deforestation are eligible for funding, whereas countries with a good track record of environmental conservation receive nothing from the program. So far the governments which have received funding include Cambodia, the Philippines, and the Solomon Islands.Such areas are known for extractive activities resulting in habitat loss, deteriorating biodiversity and soil erosion.

According to a report by GenderCC-Women for Climate Justice, with the support of the United Nations Environment Programme (UNEP), indigenous people in Kenya were arrested and evicted from 21,000 hectares of land in 2009 alone. On Brazil’s Atlantic coast, it has been reported that REDD is also permitting the destruction of lands inhabited by indigenous peoples, who REDD deny ever “owned” the land in the first place. One man was arrested and held at gun-point by government officials for cutting down trees to fix his mother’s house.

In Panama, economic growth was at first privileged by REDD over the rights of indigenous peoples such as the Guna, Ngäbe, Buglé, Naso-Tjêrdi, Bribri, Emberá and Wounaan. When the National Coordinating Body of Indigenous Peoples in Panama (COONAPIP) voiced its concern for the encroachment onto their territories, a report was filed and REDD was forced to address indigenous concerns, an issue which they are still working on.

While pressurizing activities can in some case force REDD to confront their short-fallings, “conservation” has been translated by the indigenous rights report, as meaning forced eviction in order to make way for commercial forestry. REDD itself admits on its website: “there is widespread concern that REDD activities may inappropriately impact Indigenous Peoples and local communities.” It is only in Panama, after external reports were filed, that the program has done anything to address these unintended effects, engaging in “extensive consultations” with indigenous people about how to improve their strategy.

Is REDD incompatible with indigenous rights?

REDD has been described as “A new form of colonisation,” by Hector González, a lawyer for COONAPIP (the National Coordinating Body of Indigenous Peoples in Panama). His assertion is based on the fact that REDD forcefully grabs land from indigenous communities and concentrates the ownership of the world’s resources into the hands of a few corporations. This, in turn, denies the self-determination of developing countries and reinforces global inequalities.

Indeed, international law of the likes of the U.N.-REDD Programme, have also been described as ‘neo-colonial’ by certain scholars. For example, according to law professor, Anthony Anghie, international organizations such as the U.N. presume that there is a ‘natural’ order based on Western conceptions of ‘law.’ This becomes universalized as part as a civilizing mission which perceives any resistance by indigenous groups to be a violation of the ‘natural law.’

The U.N.-REDD programme strategy also mentions that there are “trade-offs between forest management measures and vulnerable groups.” Places where such trade-offs play out, where REDD has been exposed as incongruous with indigenous interests, include California, Indonesia, China, the Philippines, Panama,Ecuador, Kenya, Mexico, Papua New Guinea, Colombia, Peru and Bolivia. This raises the question, are indigenous rights compatible with U.N.-REDD strategies?

Following a review of the problematic implementation of REDD in Panama, collaborators with PRISMA, (Salvadoran Research Program on Development and Environment) Nelson Cuellar et al. suggest that REDD could still be successful when local views are taken into consideration and implemented at the sub-national level.

However, the sub-national approach would not eliminate logging activities on indigenous land. Furthermore, many indigenous groups have rejected REDD altogether. In April 2009, around 400 indigenous representatives signed the Anchorage (Alaska) Declaration, rejecting carbon trading and forest offsets as “false solutions to climate change.”

Given the criticisms faced by REDD, if an environmentally sound and people-friendly scheme is to be developed, new rules should be put in place. In a discussion of the issues faced by REDD, Erin Myers Madeira, a specialist in indigenous rights and the role of forests in mitigating climate change, proposes some steps forward.

Firstly, she asserts that REDD’s success depends on the prevention of deforestation and the protection of natural diversity. Furthermore, the livelihoods of communities in forested regions in developing countries are always affected by REDD policies, and therefore, it is crucial that these stakeholders are directly involved in the planning and implementation of REDD programs.

Tom Goldtooth, indigenous leader and Executive Director of the Indigenous Environmental Network, explains, “As ‘guardians’ of Mother Earth, many indigenous tribal traditions believe that it is their historic responsibility to protect the sacredness of Mother Earth and to be defenders of the Circle of Life which includes biodiversity, forests, flora, fauna and all living species.”Therefore, Madeira notes that the success of REDD is absolutely contingent upon engagement with local communities, who are already conserving the environment via local means.

Martin Kirk, Campaign Director of the Rules – a global movement against inequality and poverty – explained to The International, “From the perspective of The Rules…we believe [REDD] should be stopped. This is because…the pressure being put on the rainforests is ultimately driven by the demand for ‘resources’ to feed an insatiable economic system; a system that is incapable of being sensitive to how it has more than exhausted the sustainable limits of what the planet has to offer.”

According to Kirk, the REDD policy is merely an unsustainable corollary of market logic. “Neither economic growth nor market logic has a way of recognizing or processing things that do not have monetary value. If you believe this – which I certainly do  - then it becomes entirely illogical to extend that logic to try and save one of the very few unexploited assets of the planet, which is the REDD formula. The only way to protect the rainforests in the long term is to protect them from the market, not feed them to it.”

Kirk and all those who have also joined the movement against this U.N. programme, see REDD to be a solution that utilizes the same means that caused the problem in the first place, and as Martin states, “Don’t ask the market to fix a problem that the natural and correct operation of the market created.”